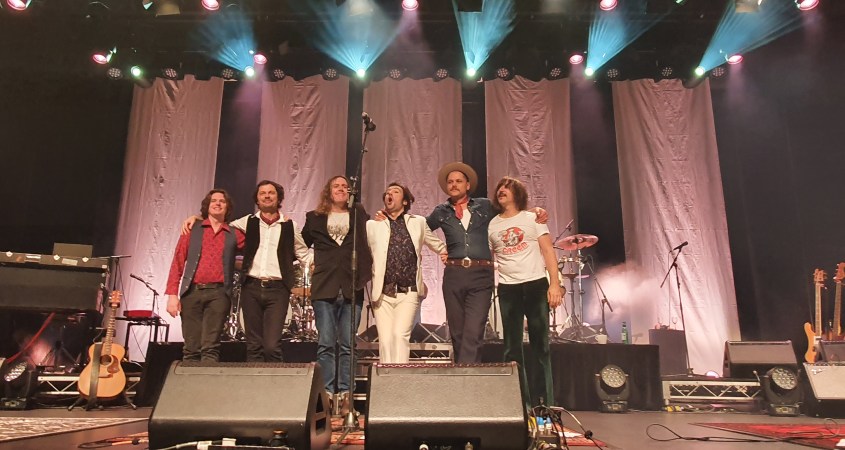 The Beatles’ album, Let It Be, began as a TV documentary in January 1969. The project resulted in the single Get Back, released in April 1969. However, the associated album was shelved for over a year, eventually being released in May 1970, after the group’s break-up.

The fascination with the Beatles’ final album was recently reignited following the release of the Peter Jackson documentary, Get Back.

After being postponed for three separate reschedules over two years as a result of the pandemic lockdowns, the Australian Rock Collective (ARC) was finally able to tour its tribute to Neil Young’s Harvest and The Beatles Let It Be during April and May.

ARC are no strangers to playing for mass audiences with members comprised of Australian music royalty, being Darren Middleton (Powderfinger), Mark Wilson (Jet), Kram (Spiderbait) and Davey Lane (You Am I). On this tour, they are joined by James Fleming and Brett Wolfenden.

Regarding touring in the time of COVID, Darren Middleton reflected:

“Taking on this tour and the previous one (Harvest) was always both daunting and exciting for us. These are albums that we know well and love and therefore, extra care needed to be taken in bringing them to life.

“In this climate… there are two reasons for us to be bloody thrilled to have achieved what we set out to do… Firstly, we nailed it!!! Secondly, we managed to complete all shows with everyone staying well!”

Another full house is onboard to witness the last show of the Australian Rock Collective tour (my seventh but who’s counting) at the Albury Entertainment Centre on 31 May. From the opening it’s clear the band are in a buoyant mood, as are the crowd.

They start proceedings with Two of Us, with the four band members harmonising superbly. The ARC Let It Be 50th Anniversary tour has landed and we are eager to hear more. They show us each of the songs on the album, authentically recreating its studio banter.

On Across The Universe Davey Lane emulates John Lennon’s spellbinding masterpiece while Darren Middleton creates a transcendental experience with guitar effects. Kram displays an interesting mix of power and fragility for the hymn-like Let It Be which sees Middleton and Fleming on keyboards. Kram starts his vocals from the front of stage before returning to his usual vantage point at the drums.

The crowd sings every word before watching as Lane, Wilson and Wolfenden present Maggie May, described in authentic Liverpudlian accent as the “silly minute” of the record.

I’ve Got a Feeling brings the Australian Rock Collective band members back together on stage and features some fine air drumming by Kram along to his own front of stage vocals. The song also gives opportunity for the two lead guitarists Middleton and Lane to come together from the opposite sides of the stage.

Although every song is a highlight, The Long and Winding Road is especially so. Middleton steps almost out of the spotlight to tell us how the song evokes a childhood memory of driving to school in his father’s car as it played on AM radio. He then launches into the song unaccompanied.

He follows with the sweet and lovely For You Blue which features fabulous blues slide guitar from Lane. ARC add Don’t Let Me Down to their set, a nod to the importance of The Beatles’ rooftop appearance which ultimately became the last ever live performance together.

After a rousing version of Get Back, again accompanied by the enthusiastic audience, the Australian Rock Collective leave the stage to a standing ovation, marking the end of the first set.

Intermission gives time for catching up with fellow patrons. It’s a real indication of ARC’s winning formula that there are multitudes of new as well as returning and repeat customers.

The second set is made up of songs from each of the Beatles solo careers. Master of ceremonies, Kram, calls each of his band members forward in turn as, song by song, Middleton (Junk, All Things Must Pass, Imagine), Lane in a resplendent white suit (Mind Games, Nobody Told Me There’d Be Days Like These, Handle With Care) and Kram (Maybe I’m Amazed, Mother, Working Class Hero) perform lead vocal.

Special highlights include McCartney’s Band On The Run, and a song that we hear influenced the formation of Wilson’s band name Jet. George Harrison’s All Things Must Pass and Handle With Care are touchingly performed, and Ringo Starr’s Photograph is heartwarming.

Perhaps unsurprisingly, John Lennon’s classic Imagine (1971) provides an electrifying moment. The stage lights dim. While the unmistakable first notes begin, Middleton takes three steps back from the centre microphone. You see him take a breath and gaze out over the audience. ‘Imagine there’s no heaven’… Gosh – something so beautiful could bring me to tears. It seems a tragedy to not ever experience this exact moment again.

After the song, Kram reflects:

“That’s about the hardest song you can possibly do, and Darren has nailed it every night. He gives his heart and soul to one of the greatest songs ever written”.

The Australian Rock Collective takes a bow for curtain call to a second standing ovation and depart. The audience are having none of this, demanding a return for a final encore.

After the hauntingly beautiful McCartney song Venus and Mars the stage lights fall and Middleton, strumming an acoustic guitar, makes a dramatic entrance to the familiar sounds of Mull of Kintyre. He recreates the bagpipe solo using harmonica. The effect draws me to the land my family emigrated from post-WW1. It makes me think of auld acquaintances that will ‘ne’er be forgot’.

The audience members raise their mobile phones on high to create an ocean of crystal lights. They frame the stage and the performers during the mass sing along. A final highlight sees Lane with wireless microphone in hand take Instant Karma out into the audience. Afterward, the third and final standing ovation of the night washes over the venue.

The house lights are switched on. Stage hands commence dismantling the set. With the words ‘…nights where we sang like a heavenly choir…’ and ‘we all shine on…’ still reverberating around the theatre, road cases are wheeled in, drum kits dismantled, guitars safely stowed and cables wound.

This is the music industry in action getting back on its feet following the impacts of the pandemic. Thanks Oysters, Chello, David, Nick, Steve, Paul. Steel guitar player (Harvest Live tour) and guitar tech Rick Steward is away for the final show on the Let It Be tour having gone to America with Midnight Oil. I tip my hat to you all.

Middleton hints that there are further 50th year anniversary tribute plans afoot for ARC. Wherever they play, ARC is guaranteed to please. Until next time… and there will be a next time.

Final opportunity to see the Let It Be tour in Sydney (September 2022).