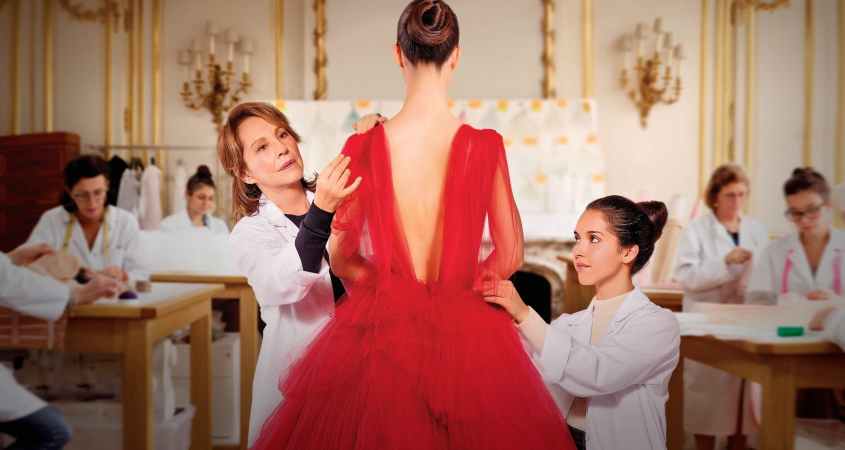 Esther (Nathalie Baye) has been head seamstress at Dior’s Avenue Montaigne workshop for many years.  Dedicated and talented, she knows all that there is to know about haute couture.  She is also nearing the end of her career and is preparing to hand over the reins to her colleague Catherine (Pascale Arbillot), with whom she has a warm, trusting relationship.  But Esther has no plans for life after Dior and no idea about how to heal her longstanding and painful estrangement from her daughter.

One day, on her way to work, Esther is robbed of her handbag by Jade (Lyna Khoudri) and her friend Souad (Soumaye Bocoum).  Later, Jade, recognising the significance of something in the handbag, returns the bag and its contents to Esther.

Though realising that Esther was the thief, Esther decides that Jade has the potential to become a dressmaker — well, at least the right hands for embroidery — and offers her the chance to intern at the Dior workshop.

Difficulties soon arise both at the workshop and at Jade’s home.  Jade’s mother has mental-health difficulties, and Souad fears losing her friend and partner in crime.

The costumes and fabrics in Haute Couture are understandably superb, and the feel of the workshop is quietly professional, like an extension of Esther’s personality.  The standards of design and creation are extremely high, and the seamstresses who work there, at the top of their game.  This is probably what exposes the film’s greatest plot hole: that a woman of Esther’s professional standing, responsible for not only the best creations on the catwalk but also the finances associated with their production, should hire, for some inexplicable reason, a street thief who can’t even hem a piece of practice calico — a thief who hasn’t shown the slightest interest in making clothes; has bad manners and a chip on her shoulder; and lacks all gratitude.

That said, the acting is terrific, and it’s easy to warm to most of the characters. The Dior gowns are of course beautifully glamorous, and the overall feel of the film is appealing.

For light entertainment and visual treats, Haute Couture may well be the ticket.