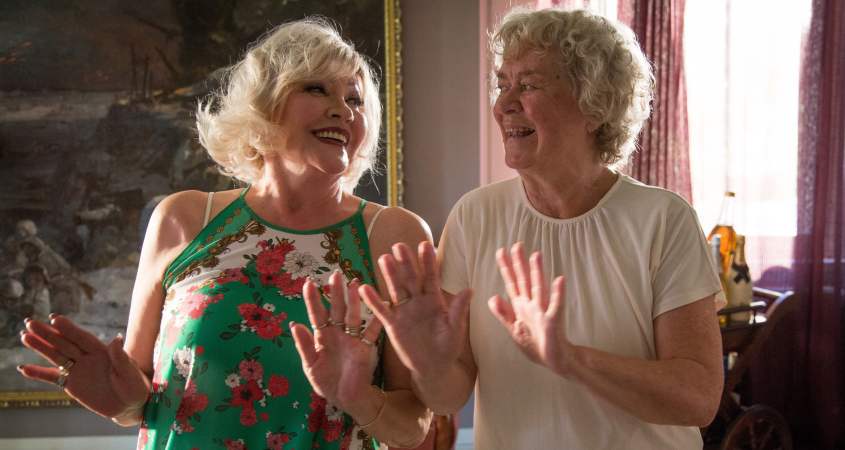 Seija Kuula (Hannele Lauri) is a former Eurovision contestant who, at almost 70, continues to make her living as a singer.  When she attends a workshop for composers who are hoping to write Seija’s next hit song, she finds that her agent has instructed them to write from the point of view of a woman who wants to talk about her long life and what she’s learnt along the way.  Seija is furious.  She wants a song to celebrate love and passion and her status as an alluringly sexy woman.

After being extremely rude to most of the composers, Seija happens to make a connection with one — 40-something-year-old Lauri (Mikko Nousiainen) — and together they create just the song Seija wants.  But the song’s not the collaboration’s only outcome: Seija and Lauri enter into an intimate relationship — leading to involvement by Lauri’s mother, Mirre (Marja Packalén), and Seija’s stylist and close friend, Shanellan (Misa Palander).

Now, the movie undeniably stretches suspension of disbelief to breaking point.  Seija’s attraction to Lauri may be based on needing to feel sexually attractive or to be diverted, but she isn’t looking for love.  And Lauri is a man in the prime of his life, longing for a committed relationship and fatherhood.  With these attributes, Lauri wouldn’t have even a one-night stand with a woman like Seija, let alone more.  These and other character inconsistencies do weaken the plot.

That said, the performances by everyone are excellent, and the movie is fun.  The costuming is rich and surprising, the settings are interesting and varied, and the movie is well-paced.  If some very light-hearted amusement is what you’re after, then a couple of hours watching 70 is just a number may fit the bill.