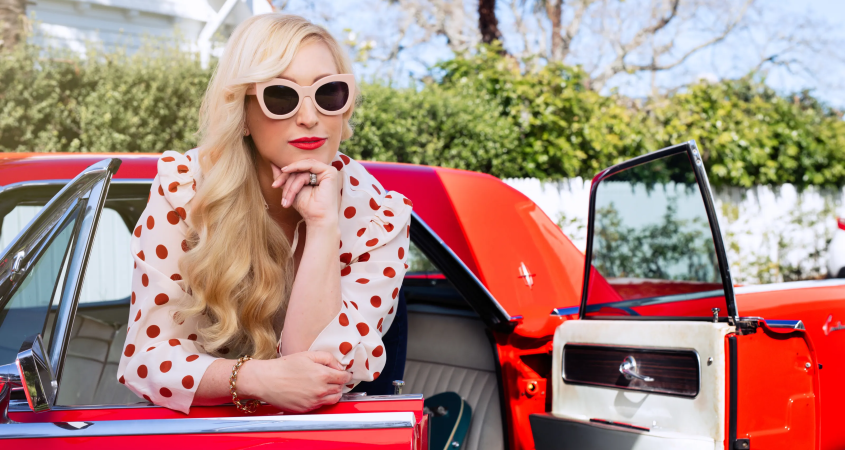 Singer–songwriter Emme Lentino has hit the ground running in 2022 with a new track, Shake It Off. It follows her recent Oceanside remix, Peter Pan, and a string of others, including Last Christmas, a reinterpretation of the classic George Michael song. That one featured on MTV Australia, the Philadelphia News Channel 17, CTV Calgary (National News in Canada), and Global News (National News, Canada) and received airplay on commercial radio world wide and via consumer outlets including Bed, Bath and Beyond.

Emme’s new release, Shake It Off, was featured in a national ad for Victoria’s Secret and is already creating a local and national buzz. It reveals another aspect to the singer–songwriter’s style, adopting a synth-pop sensibility with a restrained performance to underscore a lyric that’s straight to the point.

Though featuring a range of hooks, from power-pop guitar blasts to laid-back R&B grooves, Shake It Off reflects the broad, changing musical perspectives of this U.S.-born New Zealand artist. Emme’s brand of country-tinged pop, soul, and pop-rock has featured in several daytime television shows, including U.S. ABC’s One Life to Live and All My Children. She has also performed in an off-Broadway production and collaborated with DJ/producer Vasili Gavre, writing, recording, and performing a song in the Victoria’s Secret national BIOFIT campaign.

Less country–pop and more contemporary pop — more precisely, synth-pop — Shake It Off merges darker, more brooding tones with a series of synth and keyboard textures, most prominently a swirling keyboard bass around which the track seems to revolve. The lyric is direct and clear, yet beneath this accessibility is another layer. The chorus appears to operate from two perspectives, and this dual focus gives the lyric a more dramatic tint. In the first half of the chorus, we are speaking directly to the main players:

Shake it off, do your thing
Speak your mind, just be free.

In the second half, it’s as if we are with another group, surveying the first, with the lines

Don’t judge, you never know
A book can’t be uncovered unless you read it.

Shake It Off is a noticeable change of musical direction for Emme Lentino, one that undoubtedly will expose her to a more extensive audience base.

You can hear Shake It Off via emmelentino.com, Spotify, Apple Music, and YouTube.

Support Vince Leigh on Patreon!
8% complete
When we reach $500 per month we will begin the official BMA Podcast. This will include interviews with some well-known musicians and artists, tips and tricks for publishing in print and online, as well as other discussion topics around Bands, Music and Arts in Canberra!