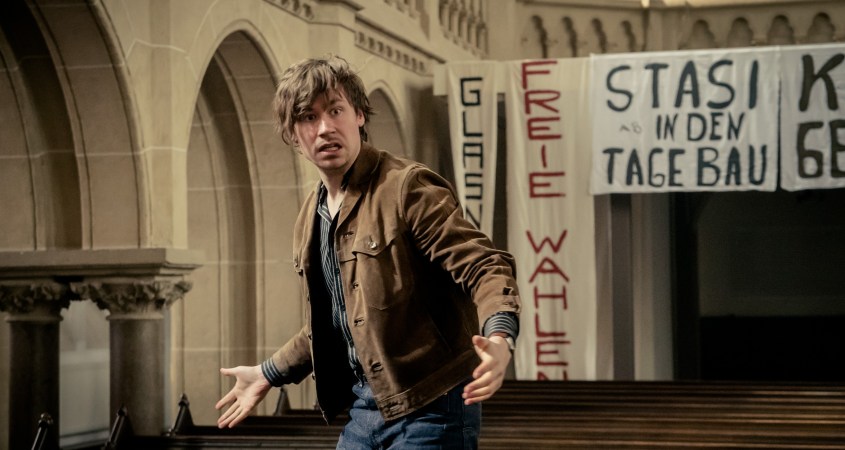 When, against his every urge to save a cat on the road, the young poet Ludger Fuchs (David Kross) strictly obeys a Do Not Walk sign, it shows Lieutenant-Colonel Siemens (Henry Hübchen) that he is made of the right stuff.  The Stasi, East Germany’s secret police, needs people who properly respect authority.

Ludger is duly recruited and immediately sent to spy on the enemy of the people: a colony of artists and writers.  There, despite prior stern warnings by his superiors, he falls afoul of that most dangerous of human vices, love, in the form of Natalie (Deleila Piasko).

And then he is instructed to marry another activist, a woman he barely knows, Corinna (Antonia Bill), and to spy on her throughout their marriage.

Thirty years later, in a reunified Germany free of the Stasi, Ludger (Jörg Schüttauf), now a famous writer, has obtained the file the Stasi kept on Ludger himself.  His family is agog to see what is in the Stasi’s surveillance file on him, and an archivist is determined to preserve it for posterity.  Ludger really, really doesn’t want anybody else, especially Corinna (Margarita Broich), looking it over.

But secrets will out!

The crimes that the Stasi, with its license to kill, committed against “suspects” kept a terrorised nation under the ruling Socialist Unity party’s thumb and were impossible to joke about.  But in recent years artists, including writers and filmmakers, have seen fit to draw attention to the Stasi’s underlying insanity not only truthfully but even through satire.

Writer–director Leander Haußmann’s satire on the topic does so with a chaotic Germanic touch of Kiwi director Taika Waititi.  Breaking the ice on the party by poking fun at the authority of delusionary self-importance, A Stasi Comedy succeeds in using the runaway train of consequences to demonstrate the madness of the secret-police state from the perspective of a time and place of safety.  It’s a highly rewarding, possibly even healing, look at official paranoia’s internal logic and its subversion by free thinkers.