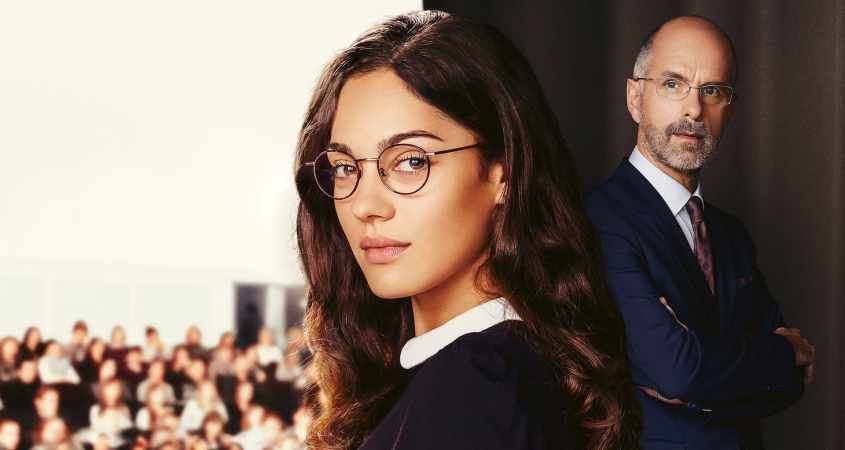 When first-year law student Naima (Nilam Farooq) arrives a few minutes late for a law lecture, Professor Pohl takes the opportunity to creatively air his ethnic prejudices in her direction.  Students’ numerous consequent complaints against him crowning a long series, he receives a quiet warning from the university’s president, Alexander (Ernst Stötzner), that he is in danger of dismissal and should offer to help prepare Naima for the debating competition she would like to enter.

Neither Professor Pohl nor Naima welcomes the opportunity.  She finds him obnoxious, and he doesn’t believe she could, even with his help, become a skilled debater.  But needs must, and as they reduce the friction between them, each learns something important from the other.

Naima; her family; and her love interest, Mo (Hassan Akkouch), are eminently easy to relate to.  Interestingly enough, despite his stiffness, even the unpleasant Professor Pohl becomes understandable.  And this makes the development of the relationship between student and teacher all the more intriguing to watch.

To tackle a socially fraught topic such as racism entertainingly takes creativity and originality.  Director Sönke Wortmann’s Contra offers that and as well infuses the tale with a good deal of gentle humour and a little intellectual substance: it offers the additional reward of a taste of the specialised skills of rhetoric, lessons that are both interesting as stratagems and amusing to see in practice.  Yet it does so with such a light, natural touch that you don’t notice that they’re lessons.