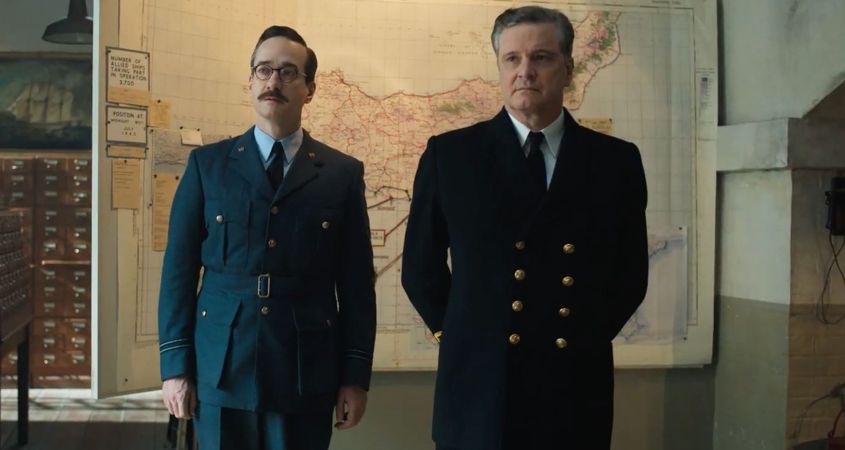 Britain.  World War II.  1943.  The Allies are preparing to invade Europe through Sicily despite knowing that Hitler would expect exactly that.  The question was whether he could be deceived into believing that the invasion would come through Greece.

It’s hard to conceive of the tremendous responsibility and fortitude that the many men and women involved in Operation Mincemeat must have had, of the utter secrecy they maintained in spite of the pressures they bore, and of the daring required of them.

Impeccable in military detail and costuming and set design, and with cinematography creating the deeply sober mood that surely reflects the wartime reality, Operation Mincemeat transports the viewer into wartime Britain and Spain to experience the military staff’s difficult decisions and meticulous spycraft amid the uncertainties of war and counter-intelligence.  The film’s restrained acting powerfully evokes the sheer nerve of the men and women involved, their absolute commitment to secrecy, and their uncomplaining selflessness.

The movie uses the character of Jean Leslie as a love interest, which I thought unnecessary.  Skewing the story’s focus, it detracts from the truly remarkable story of Operation Mincemeat and from her role in its success.

Nevertheless, the film goes a long way to show the shadowy and complex world of deception that underpinned Operation Mincemeat, considered one of the greatest feats of deception of the twentieth century.

Colin Firth as Montagu reveals a man you’d want on your side.  He’s honourable, patriotic, and steadfast, putting the needs of his country above his own in every respect.  Macfadyen brings Cholmondeley to life with subtlety and restraint, especially in his purported rivalry with Montagu.  And Macdonald’s performance as Jean Leslie is commendable — although, notwithstanding the romance sub-plot, casting could have been truer to the real-life Jean Leslie, an upper-class Englishwoman rather than a Glaswegian.

A laudable testament to courage, imagination, and sheer determination, Operation Mincemeat is certainly worth seeing.  Even for viewers familiar with the historical facts of the operation, the tension remains consistent throughout, the likely consequences of its failure almost palpable.