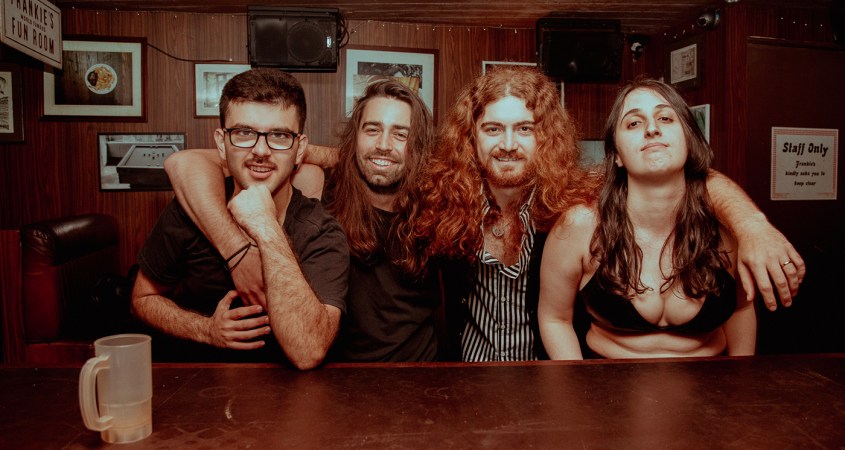 This quote from Joel O’Keeffe from fellow esteemed Oz rockers Airbourne pretty much says it all. Indeed, awesome is the unrestrained sonic assault of Avalanche’s latest pub rock ball tearer, Bottle of Sin.

For those unfamiliar with the emerging band, Avalanche’s latest EP, Second Hand Band, has generated thousands of streams and sold thousands of physical copies worldwide. It has featured in Rolling Stone Magazine, Fireworks Magazine, Tone Deaf, The Music, The Sydney Morning Herald, played on TV on 1700/C31 in Melbourne, and on ABC Radio, i98FM, Hard Rock Hell Radio and many more all over the world.

They’ve played alongside the likes of Kingswood and The Poor. And their last three music videos have amassed over 54k views on YouTube and over 120k views on Facebook.

The band, made up of the husband-and-wife duo of Steven Campbell (lead vocalist and bassist) and Veronica ‘V’ Campbell (lead guitar), also features Ryan Roma, aka ‘ADHD’ (drums and rhythm machine), and Arthur Divis (rhythm guitar).

Avalanche on “the only reason” they’re here

Bottle of Sin is an untamed, high-octane rock track, evoking (and to some degree paying homage to) the spirit of such Australian rock giants as AC/DC, The Angels, Billy Thorpe, and Rose Tattoo. With several singles and an EP behind them, this four-piece from Western Sydney sounds like it’s well-prepped and highly primed to gate crash its way into the next level of rock notoriety.

When asked what performing live means to them, the band has said:

“It’s literally the only reason we’re here. It’s the best part of being in a band and the reason we write music for more than anything; to be able to play them in front of an audience and have the place moving the whole time.

“We’ve come to be known for our live shows. We make them as massive and loose as we possibly can!”

As Rolling Stone magazine says: “Avalanche is one band you need to watch.”