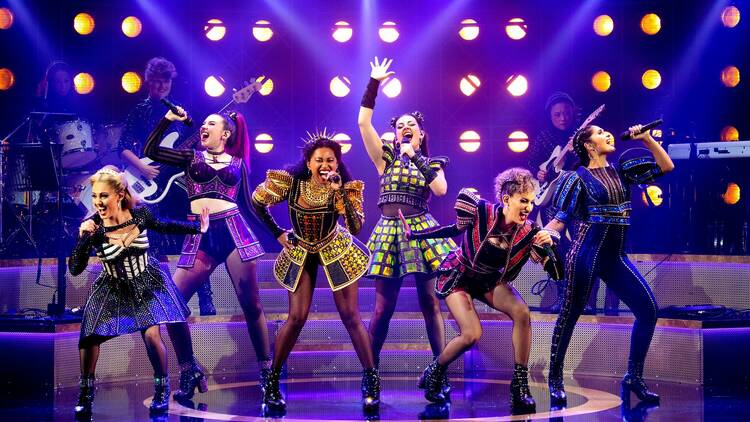 An original, witty, pop-fuelled musical packed full of sass, SIX remixes the history of the six wives of Henry VIII – Britain’s notorious Tudor King – as they take to the microphone to re-tell their stories once and for all.

The SIX powerful women are transformed from Tudor Queens to Pop Princesses as they take court in Canberra Theatre to reclaim their identities out of the shadow of their infamous spouse, twisting the narrative from five hundred years of historical heartbreak into a celebration of 21st century girl power. Check canberratheatrecentre.com.au/show/six-the-musical/ for times and tix

Speaking of retelling their own stories, let’s hear from four of the Tudor Queens/Pop Princesses themselves, when BMA asked the respective actresses about their Queen, their music, and what we, the great unwashed, should know about them.

How would you define your Queen and their character?

Without a doubt, the word to define Catherine of Aragon was loyal.

She was married to Henry for 24 years, and believed in their union until her very last breathe. Even as Henry tossed her aside, she remained true to her Catholic faith, and to him. The strength that was displayed through her loyalty was absolutely fierce.

How does your Queen express themselves through music?

Aragon’s music style is power, power and POWER! She’s a pop QUEEN, and the references to Beyonce, the queen of pop, are absolutely undeniable.

Through her song, Aragon is fierce, unapologetic, and not afraid to say HELL NO. She definitely sports a smart belty moment and a cheeky dance break.

What is something about your Queen that history has left out, and people should know?

That England LOVED HER!!!!

She was the people’s Queen! Because of the male gaze, history has tried to paint her as a needy wife who wouldn’t let go. When in reality, she was a fierce leader, and her subjects adored her. Not because she was just Henry’s wife, but because of her strong character and will.

Within the show, Anne is portrayed in a slightly different way to who she was historically.

OK, astronomically different. But I reckon the real Anne Boleyn would get a kick out of knowing she’s a badass rockstar in the show.

In real life, Anne was a brilliant woman driven by her ambition to elevate her and her family’s status – something that was deeply ingrained within the culture of the time – with one of the most bright and intelligent minds that history has seen. She was truly brilliant, and it is such a shame that history remembers her in such a scandalous way – through Henry’s perspective may I add.

It’s a real honour to be shifting that history in our way, and reclaiming this story all these years later.

This show really leans into the rock, don’t care, growling, fierceness of music. It’s pretty intoxicating to play her! Her song is so joyous and witty, and the final chorus is such a euphoric rock out – it’s a party every time!

And I think that Anne is just that, she uses music as a form of expressing her power, and in this show her power is a fierce rock god.

People predominantly know Anne for the scandal that she was a part of, and see her as the villain in the story. History has remembered her how Henry and her enemies wanted her remembered, and her brilliance and what got her into that position in the first place is not credited enough.

Outside of the immense pressure from her family to elevate the Boleyn and Howard name, she was an exceptional woman. Educated, and with the sharpest mind – understanding how to play the game of court like no other – but also questioning theological beliefs of the time and standing up for herself in a world where women were the absolute second.

She was a trailblazer and an Icon and it is an honour to play her.

Kiana Daniele is ANNA OF CLEVES

I would define Anne of Cleves as one brave and cunning woman. She was able to manoeuvre her way out of a marriage with the King, whilst maintaining respect and receiving a generous settlement.

In the show SIX, she is also quite the jokester, which is VERY fun!

Cleves expresses herself and her coolness with the backbeat of Get Down and the cleverly written lyrics.

She is constantly changing the space by including the audience, making them laugh and getting up to dance. She is well and truly here to have a good time.

She took on the forces of the Tudor court and well and truly WON!

She also sent back her wedding ring and requested it to be broken into pieces… I mean? Boss.

​I would define Catherine Parr as resilient. When faced with incredible challenges in her life, she always led with clarity, courage, and generosity.

When Henry actually tried to have her beheaded for her views as a protestant who believed that the common man should be able to read the word of God, she actually talked her way out of it! To me this shows that she was incredibly articulate. She was clearly someone who was able to bring out the best of herself in trying situations.

​Catherine’s musical style is very much inspired by the likes Alicia Keys and Emilie Sande, in that the musical aesthetic is very grounded in soul and R&B flavours.

I believe the music sounds like this because Catherine Parr is not afraid to say it like it is. She completely turns the show on its head and unapologetically takes her space. In this way, I feel like the spirit of Catherine Parr also reminds me of artists such as Solange and even Nina Simone; two artists who are and were unafraid to tell the truth.

And they did that through their music using jazz chords, funk beats, and a huge range of vocal agility from vulnerable to powerful. These are all elements inherent in I Don’t Need Your Love.

​It is so bizarre to me that people don’t know that Catherine was one of the first English women to publish a book under her own name! She was also hugely responsible for raising Elizabeth I, who ironically ended up becoming one of the greatest monarchs in England’s history (after Henry was so obsessed with having a son to see out his legacy).

Catherine inspired Elizabeth’s education and was a huge advocate for women’s rights.

It is about time that the world got to know a little bit about her actual achievements, beyond the way history has painted her; as a dowdy mother figure who just happened to outlive Henry.

SIX The Musical is on now at Canberra Theatre until 15 May. Tickets and info are available by clicking here.