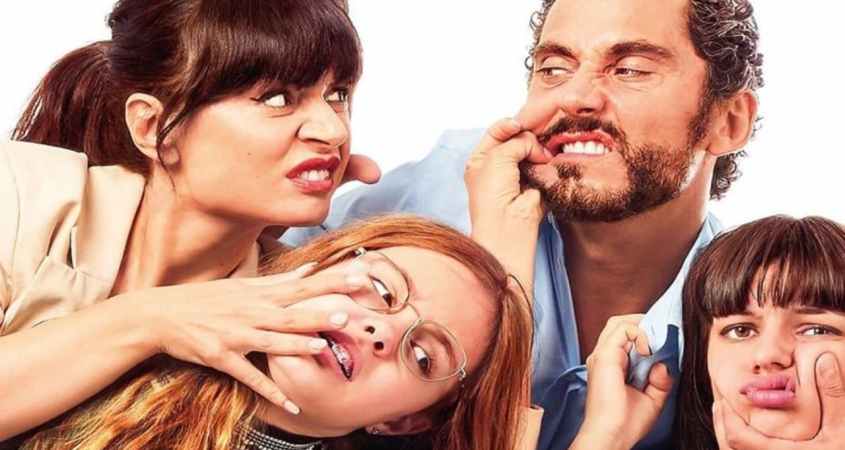 Movies about divorce often highlight one or another style of selfishness that at least exacerbates tensions and accelerates a relationship’s decline, frequently accompanied by misuse of opportunities to damage the other parent’s relationship with any children of the marriage.

This one is different.

In You Keep the Kids, the eldest child, senior high-schooler Alexia (Sofía Oria), looks after her awkward younger sister, Sara (Laura Quirós), and little brother, Juan (Iván Renedo), and all three are sensible, because Flora (Miren Ibarguren) and Victor (Paco León) are both great parents.  Knowing that their announcement of impending divorce will devastate their children, they postpone it while they can, and are entirely cooperative about sharing custody; neither wishes to obtain a custodial advantage over the other.  All is calm, all is right.

And then… career opportunities arise for both parents that entail removing overseas to different countries — without the children.  Now there is a competition: to have the children choose the other parent to live with.

It’s the outrageous lengths to which each parent will go in order to motivate the children to choose the other that makes this tale stand out.  For whilst they are essentially good-hearted, both parents are capable of exercising poor judgement.

FollowingThe Wedding Unplanner, director Dani de la Orden has made, in You Keep the Kids, another wonderfully unrestrained comedy, one of implosive competitive self-demotion, and the result is a film filled with zany hilarity.  It’s a train wreck, yes, but not as we know it; and though you’d never do the things these parents do, the result will make you laugh aloud rather than cringe.  If you have a family of your own to bring along, watch the effect as they come to appreciate how lucky they are!