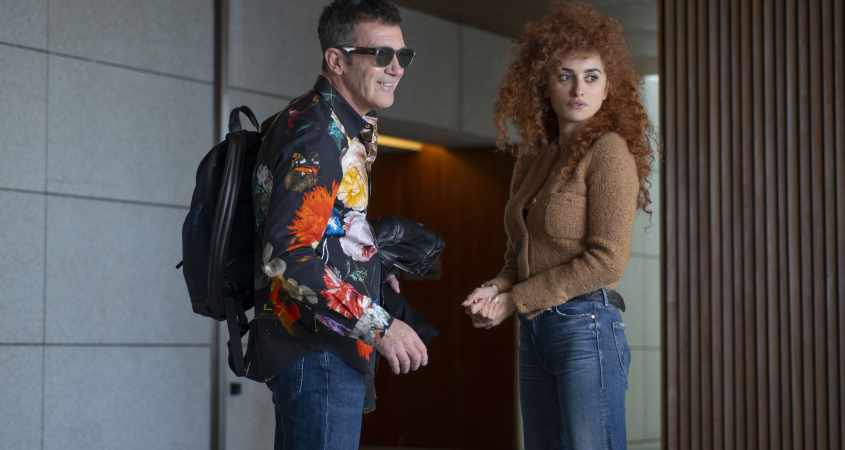 On his 80th birthday, tycoon Humberto Suárez (José Luis Gómez) realises that he would like to leave something for the world to remember him by: he’ll make a great movie!  Unconcerned as to details, he finances it and brings in famous eccentric film director Lola Cuevas (Penélope Cruz) to direct it.  Cuevas chooses for its conflicting leads two of today’s biggest names in movies: Hollywood star Félix Rivero (Antonio Banderas) and star of the stage Iván Torres (Oscar Martínez).  Rivero and Félix are painfully aware of each other’s swollen pride, but they are professionals, each keeping his opinion of the other to himself… and their director… at first.

But Lola soon recognises their ploys and the need for her to step in and bring them both down to earth.  So, in her quiet way, Lola becomes a terror, challenging both the relevance of their usual methods and their emotional certainties.

The plot (which I’ll refrain from revealing more of than I have) reveals incidentally just how finely Banderas and Martínez control their acting personas, through their movie-star characters’ responses — both professional and emotional — to direction.  Their abilities even as fictional actors underscore both their deep understanding of emotional nuances and their skills in conveying them.  In that regard, Official Competition offers an amusing window into how movie rehearsals with stars precious about their professional status just might go.  Regardless, though, of the reality beneath the plasterwork, the fine fare that this comedy of egos serves up on a platter of oneupmanship and misdirection earns it a lot of laughter.