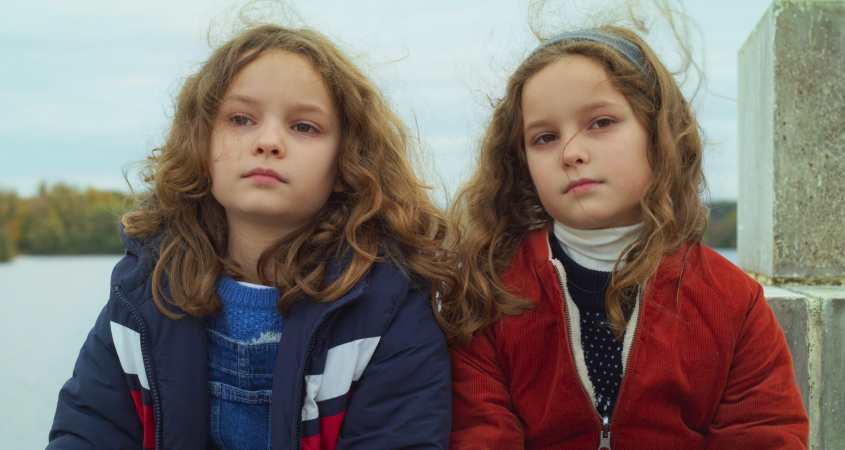 Odd experiences and intergenerational understanding combine in this warm fable of an eight-year-old girl’s new friendship with another girl of her age, and the appeal of these themes is evident in the number of those who attended Canberra’s only scheduled session.  Writer–director Céline Sciamma’s previous work as writer–director includes Tomboy and Portrait of a Lady on Fire, but with Petite Maman she has made a film that speaks to the heart and that young children will understand instantly though it provides no easy answers to obvious questions.

Nelly and her mother are grief-stricken, having just lost Nelly’s maternal grandmother.  Nelly and her parents travel to her grandmother’s home, adjoining a forest, for a few days of tidying up.  When Nelly wakes at the house to learn that her mother, overcome by grief at the loss of her own mother, has left with little warning, Nelly explores the forest and encounters a girl, Marion, with whom she forms an instant bond.  It is chiefly the story of their fast friendship and natural connection that gives this film its tender-heartedness, though Nelly’s parents and Marion’s own mother all add to that sense of true family.

The interest of the film may lie less in its plot than in its subtleties of character; yet the two are intertwined, as the plot’s essence is the unfolding of these characters.  Both Nelly and Marion are sensitive and generous, as are their parents, and it is largely their subtleties in sharing who they are that move the film forward.  At the tale’s heart lies this mystery: is Nelly’s new friend who Nelly thinks she is?