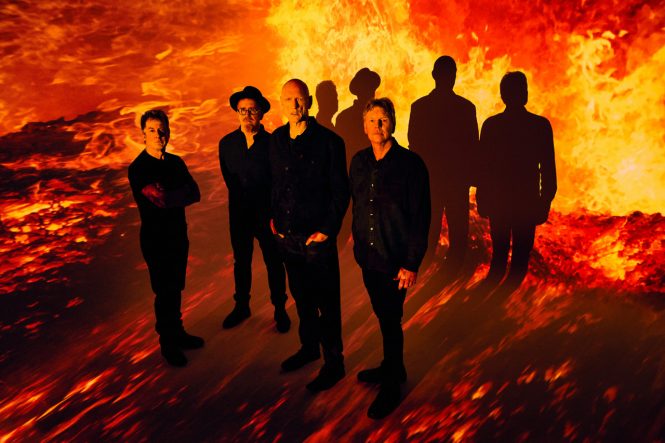 Midnight Oil’s Stage 88 show this Tuesday, 19 April is fast approaching, and with it come breathless reviews of their final ever tour, as well as support artist announcements.

In the wake of last week’s acclaimed Tasmanian gigs, Midnight Oil today unveiled the full line up for each show of their imminent mainland tour. The dates will feature a broad palate of Australian sounds, from buzzing pub punks, Amyl and The Sniffers through the young surf rock of Darwin’s King Stingray to the mighty Hoodoo Gurus just as they launch their new album.

These shows kick off with sold out gigs in Newcastle and Wollongong, shortly after the band’s new album Resist is released on 18 February.

When announcing the dates last November the Oils revealed this would be their last concert tour and that it would hopefully be followed by some other shows overseas – this remains their intention providing international travel is possible.

Meanwhile, critical reaction to the band’s appearances last week at the Mona Foma Festival in Launceston and Hobart has been complimentary to say the least:

“If the first concert of Midnight Oil’s last tour was indicative of the 18 dates to follow, the Sydney-born band is fighting against the laws of rock ’n’ roll nature by going out on top… If you can, go.”   The Australian

“Farewell tours often have one eye on the past and the other on the cash register – but if Midnight Oil’s show in Launceston on Sunday was any indication, they’re not coasting to the finish line.”   The Guardian

“Midnight Oil’s farewell lap, to mark a new album, and preserve the legacy of their blistering live shows, was never going to be reflective and dewy-eyed.”  Herald Sun

And now comes news that the wonderful Emily Wurramara will be joining the Canberra show.

EMILY WURRAMARA originates from Groote Eylandt in the Northern Territory and is an AIR award-winning, six-time Queensland Music Award winner and ARIA-nominated artist.

In 2018 Emily released an 11-track album Milyakburra, educating and informing in both English and Anindilyakwa languages. The critically acclaimed album features the emotive Lady Blue and Black Smoke.

Emily has performed on many global stages, and has toured and played with iconic artists including Archie Roach, Mavis Staples, John Farnham, Missy Higgins, Jessica Mauboy, John Butler and more.

Described as “one of music’s most inspiring Indigenous role models”, Emily’s second album is set for release in 2022.

Midnight Oil with Emily Wurramara play on Tuesday, 19 April at Stage 88. Tickets and further info can be found at this link.