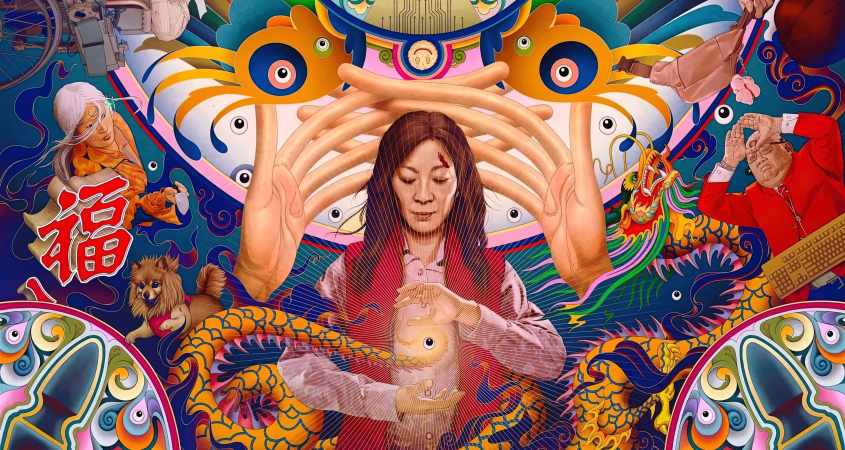 In the most mundane of countless alternative realities, Evelyn (Michelle Yeoh) struggles to keep her failing laundromat afloat and can spare no attention for her neglected husband, Waymond (Ke Huy Quan), and daughter, Joy (Stephanie Hsu).  Most urgently, she must collate hundreds of invoices within hours if the business is not to be closed down by the Internal Revenue Service’s (I.R.S.’s) dreaded but long-suffering agent Deirdre Beaubeirdra (Jamie Lee Curtis).  But at the most critical moment of Evelyn’s face-to-face negotiations with the I.R.S., Waymond does the impossible, taking her into an adjacent universe to beg her help to save the entire multiverse of worlds.

Evelyn has no time for that: she must do her taxes.

But needs must.  Pursued by mortal enemies from other universes, this lowest-achieving of all Evelyns is forced to continually jump realities, accessing her other selves’ collective abilities, in order merely to survive — and just possibly save all life and conjectural possibilities in the multiverse as we know it.  And the most critical moments will demand of her the most unlikely (and shockingly funny) snap decisions.

This latest escapade from Dan Kwan and Daniel Scheinert, co-directors of Swiss Army Man, takes only unexpected turns.  Unparallelled in its combination of creative energy, transdimensional urgency, inter-universal consciousness, intelligence agency, and hilariously mad zaniness, Everything Everywhere All at Once will keep you flinching, gaping, and laughing aloud in consecutive moments throughout.

And, for the icing on the cake, the plot makes complete sense.  At least, on the second viewing.  I think.

Screening at Palace, Dendy, and Hoyts cinemas from 14 April.