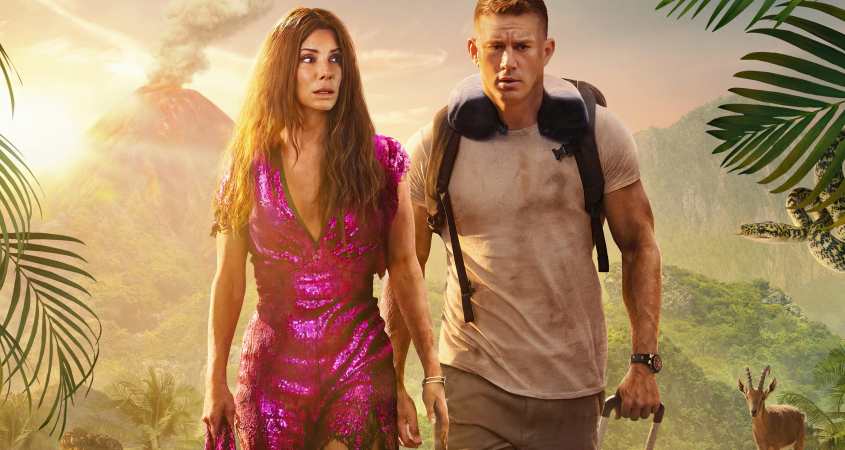 Trained from a young age as an ancient-language specialist, Loretta Sage (Sandra Bullock) has, in a more recent career, written a wildly successful series of romantic adventure novels whose hero, Dash, appears on the covers in the form of model Alan (Channing Tatum).  Having wrung herself dry to write her most recent book, Loretta is ready to throw in the towel.  She need merely complete it… and face the gruelling book tour that her agent, Beth (Da’Vine Joy Randolph), has invested everything in — and do so with a smile though at each book signing the attendees’ attention is not for the series’s author but for its cover model.  And if there’s one thing that Loretta can’t stand it’s Alan in all his muscular glory.

Unbeknownst to Loretta, treasure hunter Abigail Fairfax (Daniel Radcliffe) has other ideas as to how Loretta should spend her time, which don’t include her finishing her book tour.  He sets out accordingly to assure her that his plan for her will be in her best interests to agree to.

Alan doesn’t agree, and that’s where the adventure begins.

Plenty of mayhem and highjinks follow as Alan, Beth, and Loretta herself seek to foil Fairfax’s nefarious plans, which, rather inconveniently for them, are unfolding in the middle of a jungle.

Though the film lingers too long on moments that are a bit too silly, the plot hangs together and nicely distinguishes the characters on both sides.  And the evident incompatibilities and tensions between Bullock’s Sage, Tatum’s Alan, Radcliffe’s Fairfax, Da’Vine Joy Randolph’s Beth, and Brad Pitt in an understated role as hired help contribute to the unexpected.  Action is plentiful; special effects make it spectacular without going over the top; and the movie is a whole lot of fun throughout for anyone from about the age of ten.