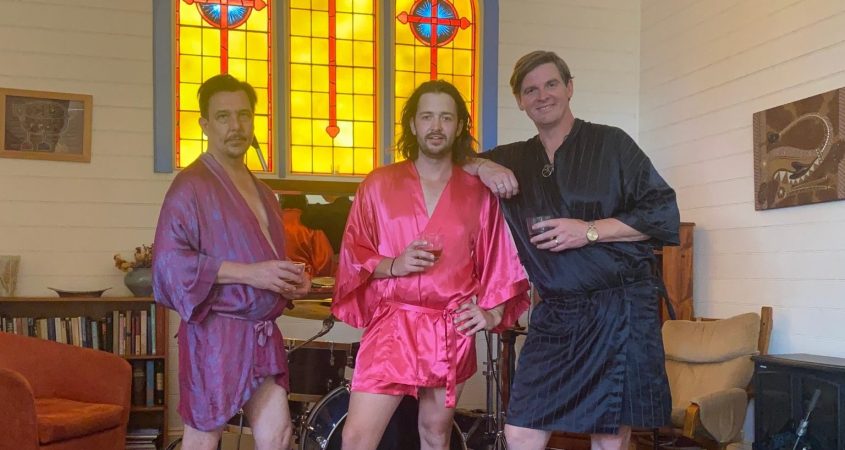 The SunBears’ last single, Devil Smile, went to #1 on the National Metro AMRAP charts, was voted #13 by Canberra Indie and gained a semi-final spot in the International Songwriting Competition.

Not bad for a band four singles into their career.

And with shows booked around the country at major festivals such as the Thredbo Blues Festival, Bendigo Blues and Roots Festival, Moruya Blues & Roots Festival, Enlighten Festival, and Torch Fest, 2022 is shaping up to be a big one.

The band’s new release, Naughty Boy, deviates from the brooding growl of Devil Smile in that it seems to aim for the feet. Cue the blazing rock shuffle that takes flight from the opening snare fill and does not let up, not one iota.

The SunBears bank on rambunctiousness

Clearly, the band, or lyricist, has issues with Old Nick, and well, who the hell doesn’t? Contemplate this line, near the end of the Bears’ obstreperous resolve:

This woman made me the devil
ain’t nothin I can do.

Okay, all political correctness considerations aside, this predicament is, of course, quite dire.

Hence the groove’s rambunctious, steamrolling nature, the fevered dynamics, the classic twelve-bar blues progression, and subsequent arrangement: the archfiend and rock ‘n’ roll go way back. Right back to the birth of the blues, all those spirituals; the work songs of the deep south.

And this track is indeed a workout.

What’s most arresting here is the marriage of this galloping, rolling rhythm with CC Hall’s Hendrix-like wailings and drummer Dylan Harding and bass player Craig Marshalsey’s hurtling yet tightly coiled alliance, giving the track a sense of threatening, streamlined energy.

It all works, of course. No doubt Naughty Boy is a highlight of the band’s live shows—and justifiably so.