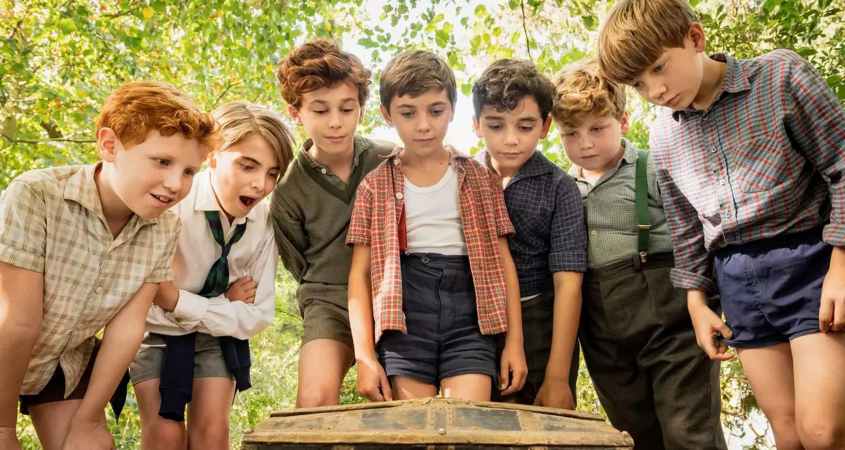 In early 1960s France, nine-year-old Nicholas (Ilan Dabrabant) has had many adventures with his gang of friends, The Invincibles.  But now disaster looms: Nicholas’s father (played by Jean-Paul Rouve) has been offered the position of managing a branch hundreds of kilometres away.  Nicholas and his mother (played by Audrey Lamy) love being where they are, as does his father, but his father has accepted the promotion, and they must move house.  That will mean that Nicholas will lose his friends, and they, him — unless The Invincibles can somehow raise the equivalent of the money that has motivated his father to accept the promotion — such as by finding a treasure.

But they are young children, and of course no possible way exists for them to do that… until Nicholas finds a clue to the location of a hoard of treasure buried long ago by the Viking Olaf One-Eye.  The Invincibles follow a trail of tantalising clues, but what are their chances?

At the same time, Nicholas’s class teacher (played by Adeline D’Hermy) faces chaos because she cannot bring herself to be unpleasant to the class, and the school’s endearingly gentle principal (played by Jean-Pierre Darroussin) finds himself at odds with the school disciplinarian, Mr Lebon (Grégory Gadebois), who is having immense difficulties in maintaining control, because his whistles keep disappearing.

A reliable guide to the good things in life, Little Nicholas’s Treasure is a great deal of fun for anybody from the age of seven or eight.