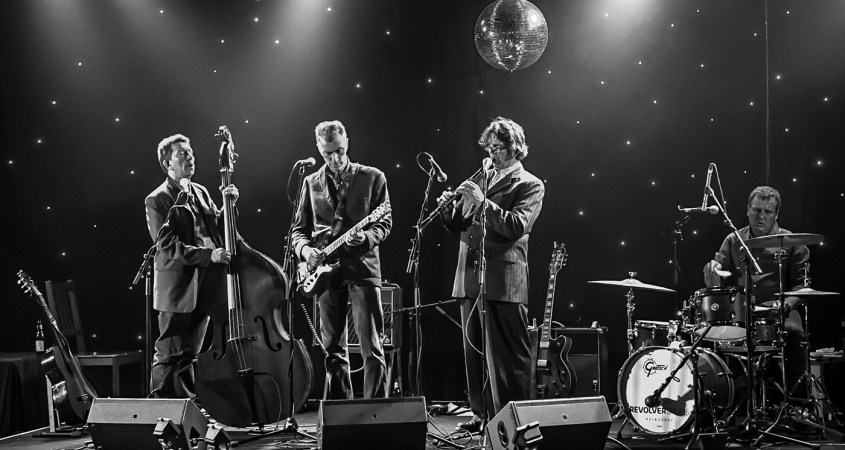 Very few bands last four decades. But Canberra’s own quirky The Gadflys have reached that significant milestone. BMA spoke to founding member Phil Moriarty ahead of a celebration of ‘Mongrel Jazz’ music, with the band plays its 40th anniversary show at Canberra Theatre.

Asked about the origin of the band name, Moriarty said the moniker appealed because of its meaning of being an outsider, and its literary and musical connotations.

“Besides that, it’s someone who comments on society as well, and Henry Lawson had a journal called The Gadfly,” Phil fills us in.

The Gadflys – the journey thus far…

The band’s journey has been somewhat convoluted. Seminal members Phil and brother Mick went through Canberra punk bands The Slammers and Brainiac Five before the first iteration of The Gadflys was created (including members poached from The Shuffle). Phil remembers their first gig at Manuka Football club well.

“We had a residency at a place there called The Pits. We probably made more money there than we did playing around Sydney.”

Due to job changes and age issues, there was some shuffling in the line-up. It eventually firmed up with Elmo Reid on bass and Pete Velzen on drums (when he was old enough to play in pubs).

“We had a pretty rock ‘n’ rolly electric band playing for three years in inner Sydney. Based at the Sandringham Hotel.”

“We got rid of the electrics and my brother went on the acoustic guitar and Andy Lewis played double bass.”

The second iteration of The Gadflys saw the shift in style from punk sensibilities to what Moriarty coined as ‘Mongrel Jazz’.

“It was kind of because I played clarinet which, unlike saxophone, is not really a rock instrument. We were influenced by bands like The Violent Femmes and The Pogues.”

The Gadflys gained their greatest exposure as the house band for fellow Canberran Paul McDermott’s TV show Good News Week. Getting the gig, it seems, was a fluke.

“The producer and Paul McDermott were at the Edinburgh Festival when we were there. They saw our show and asked if we’d be interested in doing the pilot for this spinoff of Good News Week. After hearing nothing for a year, we found out we were in.”

The Gadlfys on Love & Despair

In 2019 the band released Love and Despair, the first LP in 19 years. Members came from cities around Australia to lay down new tracks at Moriarty’s Candelo studio. Moriarty says it was not hard making new music after all that time, with the family reunited with original members Reid and Velzen. The latest album is Moriarty’s favourite due to the sound quality achieved.

“We dealt better with our voices than other people [producers/engineers] have. I’ve got a foggy voice and Mick has a lower voice. I let the voices be [with no studio alterations] and put the music around it.”

In addition to the band’s original line-up, the Canberra show will see the music swelled by special guests Katherine Brownhill (violin), Gemma Clare (cello), Penny McBride (trumpet), and Nick (trombone). Moriarty found it easy to create the set list, ensuring that fans will enjoy a diversified collection of material, including early songs.

“Our first release was a cover of Petula Clark’s Don’t Sleep in the Subway. We did a rocked-up version that never went out due to a fault on the B side. Festival Records would not reprint it. In retrospect, we could have put it out at half the price.”

The anniversary show (and latest LP) almost didn’t happen. Moriarty suffered a heart attack mid-show (with another band) in 2017 at the Tathra Pub, and had to be revived.

“I basically died on stage and had to be resuscitated by six medical staff who happened to be there. My girlfriend said that was my one chance to go out with glory, instead of getting old like the rest of us!”

The Gadflys play their 40th Anniversary show at the Canberra Theatre Playhouse at 8pm on Thursday, 17 March. Tix $44 – $49 plus bf via venue.