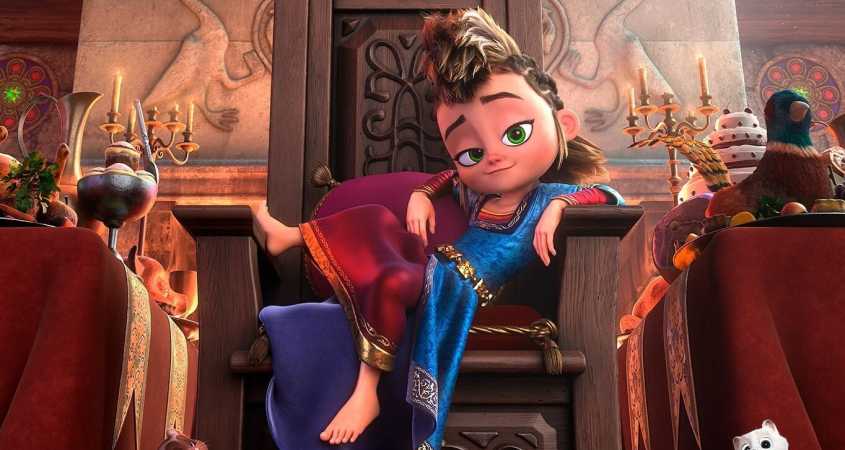 Orphan Pil lives with her clever weasel friends on the streets of the medieval city of Foggyburgh, where together they steal enough food to meet their needs, especially by tricking the clumsy but ultimately good-hearted guard, Graubart, out of his mince pies.

When Prince Roland, of age to take the throne, prepares for his coronation, and the castle fills with guests and citizens delivering their goods for the coronation feast, Pil disguises herself as one such citizen so that she and her weasel friends can enter the castle and enjoy the celebrations, especially the delicious food.  She thus teams up with Jiggly, a very funny member of the troupe brought in for entertainment at Roland’s coronation.

Meanwhile, in a secret tower, the evil regent Tristain, who has occupied the throne for the previous fifteen years and who has no intention of relinquishing it, lures Prince Roland into the tower and attempts to poison him.  The race is now on to save the prince and the kingdom from the cruel reign of Tristain.  Can Pil and her little band find the antidote to the spell in time to change the prince back into his human form or will Tristain hunt them down before they succeed?

From its opening scene, Pil’s Adventures is filled with delights.  Its pace is excellent, with plenty of mayhem and daredevil action and near misses to sweep children (and adults!) along and enough quiet moments for them to catch their breaths.

Using colour to clarify who’s who in the social hierarchy, and with great use of props, animals, higgledy-piggledy buildings, and imposing statuary and castle, this highly detailed animation brings to life an adorable medieval village with its verdant pastoral surrounds — which may or may not contain the odd less-than-friendly beast — and a scary forest with some scary inhabitants, Pil’s Adventures draws the viewer into a fantastical fairy tale holding no nightmares.

Rounded out by an excellent musical score, Pil’s Adventures is sure to entertain moviegoers aged four or more with its humour for all ages.  And as no one dies or comes to a horrible end — not even Tristain and his treacherous troops — it’s unlikely to upset small children.