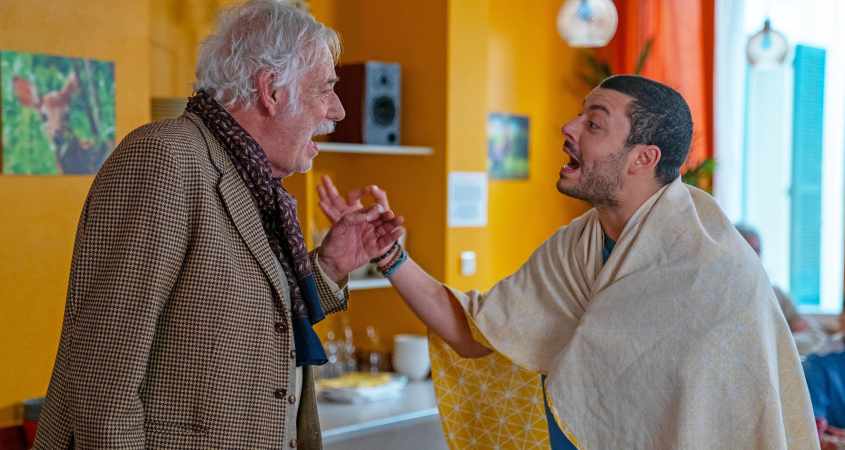 With a long-standing problem in relating to older people, Milann Rousseau (Kev Adams, who also co-devised the story) lands himself in trouble when his impatience in his supermarket job leads him to accidentally injure an elderly customer.  He avoids a prison sentence for this escapade only because his best friend, Moncef (Oussama Kheddam), persuades the judge to instead sentence him to 300 hours of community service — at a retirement home.

Milann’s inattention and disrespect at first thoroughly alienate him from the home’s residents; but a secret committee of the home’s most savvy residents, led by retired boxer Lino Vartan (Gérard Depardieu) uses ruses on him by which he gradually recognises their humanity and thus comes into his own.

As Milann gradually habituates himself to relating to others more than to his video games, he comes to want to help the residents get out every so often — and runs into an immovable obstacle.  The home’s director, Mr Ferrand (Antoine Duléry), permits no excursions, and has a scary head of security, Erwann (Ludovic Berthillot), to enforce his rule.  And some of the residents have simply accepted that imprisonment is their lot.  Milann finds this odd; and eventually he realises some further oddities in the home’s setup.

The Villa is a comedy through and through, and it exposes the aged-care facility’s systemic elder abuse with a light touch.  It makes terrific use of the comic abilities of standout actors, including, besides Depardieu, Daniel Prévost (as the memory-impaired Alfred); Jean-Luc Bideau (as Edmond); Liliane Rovère (as Sylvette); and Marthe Villalonga (as Claudine).  And it does so not by making fun of the elderly but rather by making the most of their capacity to turn the tables on their would-be tormentors.