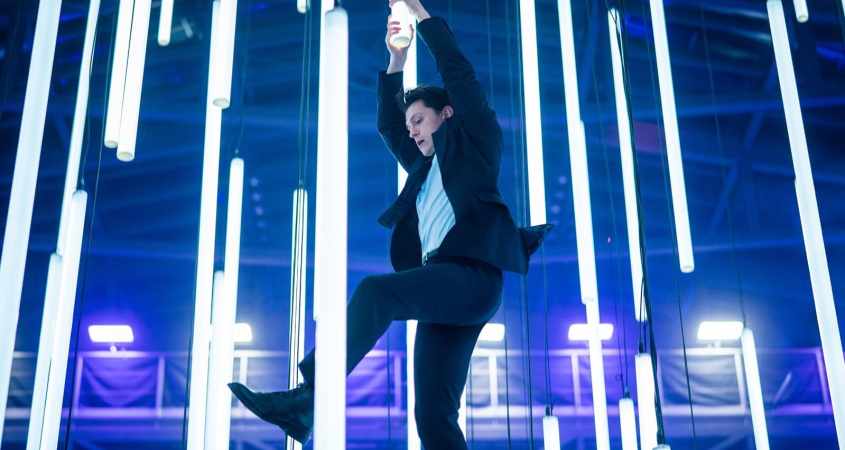 When its opening high-octane battle for survival comes to a natural pause, Uncharted takes us back 15 years to the boyhoods of orphaned brothers Sam (Rudy Pankow) and Nate (Tiernan Jones, with Tom Holland playing present-day Nathan) and their preoccupation with the fate of a cargo of gold that Ferdinand Magellan allegedly pirated before dying in the Philippines.

After Sam is forced to leave him behind, Nathan hears from him by postcard for ten years or so — and then hears nothing further, until he meets Victor “Sully” Sullivan (Mark Wahlberg), a habitual treasure hunter also hoping to find Magellan’s looted gold.  Sully knew Sam, and may be able to offer Nathan some clue to Sam’s fate.

Will Nathan team up with Sully?  Will they also be rivals?  And when a third treasure hunter, Chloe (Sophia Ali), joins forces with them, will it cause regrettable complications?

As well, of course, a treasure hunt would be incomplete without somebody trying to stop you; in this case, the family that sponsored Magellan’s quest for the gold, the Moncadas, in the person of Santiago Moncada (Antonio Banderas) and his dastardly gang.

Uncharted fulfils the potential in its game progenitor and exceeds the promise of its official trailer.  (And this is one case in which seeing the trailer beforehand heightens anticipation as the film’s climactic scene opens.)  Brilliantly edited; backed by a great score and half a dozen suitable songs; using very expensive props and sets; accelerated by hair-raising chase scenes; featuring intriguing twists and turns and devastating reversals; and culminating in a delightfully unlikely naval engagement, Uncharted is an absolute hoot.  Don’t miss it.