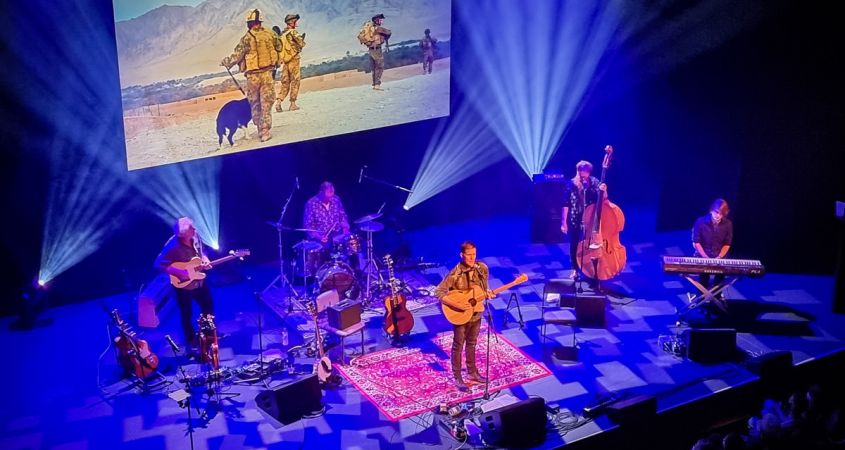 The concert’s first half reprised songs from Smith’s album Dust of Uruzgan, which reflected the experience of a range of participants encountered in his diplomatic work in cooperation with Afghan tribal leaders in overcoming the continuing conflicts, paving the way to a truly functioning democratic government, and helping the Afghan people in various regions in any way they could to survive the struggles that constituted daily life and death in Afghanistan; even granting moments of joy.

I’ve written about Dust of Uruzgan before: the way Smith’s songs quietly work on your emotions through his genuine empathy with the Afghan people. The songs are no less relevant or powerful when Smith performs them today — “Dust of Uruzgan” is as evocative, “Sapper’s Lullaby” as moving, “Niet Swaffelen op de Dixi” as unexpectedly funny — and this may be so partly because his own Afghan experiences are so recent.

The concert’s second half largely concerned itself with events in Afghanistan since 2011, up to and including untimely withdrawal by the nations that had overthrown the Taliban and begun setting up provincial democratic government but not yet brought the country’s police and peacekeeping forces up to strength. And Smith’s times in lockdown and many periods in quarantine after Afghanistan haven’t been wasted; the concert features a couple of brand-new songs. Such powerful pieces as “This I Know” and “Gates of KIA” held the audience perfectly still in their typical understatement of catastrophe; but others offered more amusement.

Smith’s scene-setting — usual in his live concerts, through a combination of verbal narration, slides, and wry captioning — were frequently as emotionally arresting as the songs themselves, whose lyrics can take you by surprise even if you’ve heard them before — as can the outrageously funny tidbits lurking in his facetious true yarns.

In a world beset by megalomaniacs, those most beset need all the help they can get from skilled down-to-earth people who feel for them. With his quiet, compassionate attentiveness, a bird’s-eye view of world affairs, a wicked sense of humour that coincidentally meets Afghani humour on its own ground, and no problem in entertaining those who need it when they need it most, Fred Smith is one of those, and he gave full credit to those on the ground in Afghanistan and others in Canberra who worked long, hard hours to rescue as many as possible before the western nations left a vacuum for the Taliban again to fill.

When you go along to hear Fred Smith, you’re in for a total experience, whether he’s playing with just one other or with an entire spooky chorale. But many others’ contributions (think of sound, lighting, ushering, general organisation…) in time, effort, and expertise were evident in the experience. Fred Smith’s Welcome Concert took, and acknowledged, generous contributions by many behind the scenes. These include the Canberra Theatre Centre’s staff, working tirelessly with Fred on the event to raise, all up, $20,000.