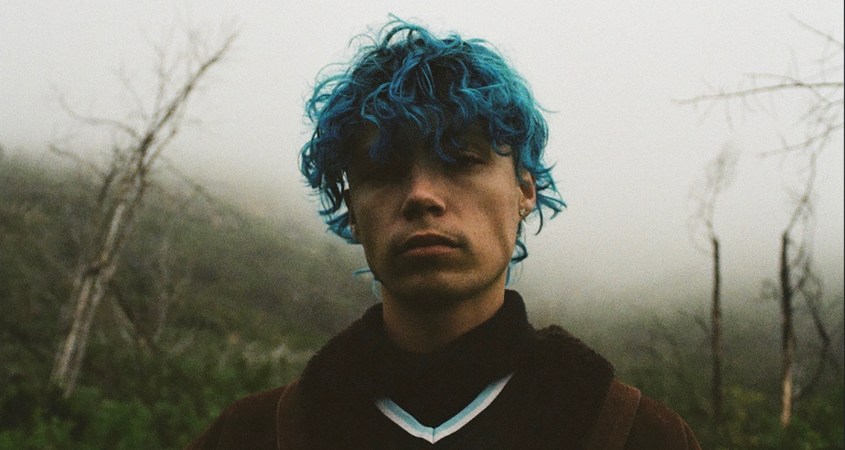 Damn, I wanted this track to live up to its title. I guess no one can really do drugs, can they? I mean, many have tried, and many will keep trying, but ultimately you’re up against science.

But this is not science; this is art, and aboynamedblu’s new track. The lead tune from his second EP, in a room with no floors, gives a rousing mini-tour of his artistic choices. These play out within the framework of a three minute and three-second indie-pop super swirl.

It certainly lives up to its title in that I was blindsided by a retro-infused but generally defiant musical experience. When it kicks off, one is immediately taken back. Back to the emergence of indie-pop. Namely the era where The Cure used quirk and flighty melodic sensibilities to create stand-alone gems.

The South African singer-songwriter and producer aboynamedblu utilises this gothness and merges it with ’90s industrial alternative rock.

Well, perhaps not that industrial, really.

But there are moments where the punch and pull has a kind of eerie, lost in the bleak tone to it. This is most resolutely evident at the two-minute mark where a strange silence calls to the mind the harrowing emptiness of NIN’s prime output.

During some moments, Posh Boys Can’t Do Drugs is suitably unrestrained and raw yet utilises a well-considered and no doubt conscious sense of dynamics. And all with a playful punk stance.

As aboynamedblu says about the new single:

“I recorded most of the vocals for the song, a day after a trip that turned manic. I wanted to try and recreate that hysteria that I felt while I was still close to it.

“A few weeks after, my best friend and co-producer, Cat Gallent, put me on to a Liam Gallagher tweet about how posh boys couldn’t handle their drugs.

“Aside from the iconic status of Oasis, it just seemed to encapsulate the song. So Posh Boys Can’t Do Drugs came about.”

aboynamedblu’s debut EP Alone On Most Days was released independently in April 2021, attracting positive responses from a host of global music blogs, and helping the emerging artist to solidify a groundswell of followers.

A promising marriage if I’ve ever heard one.