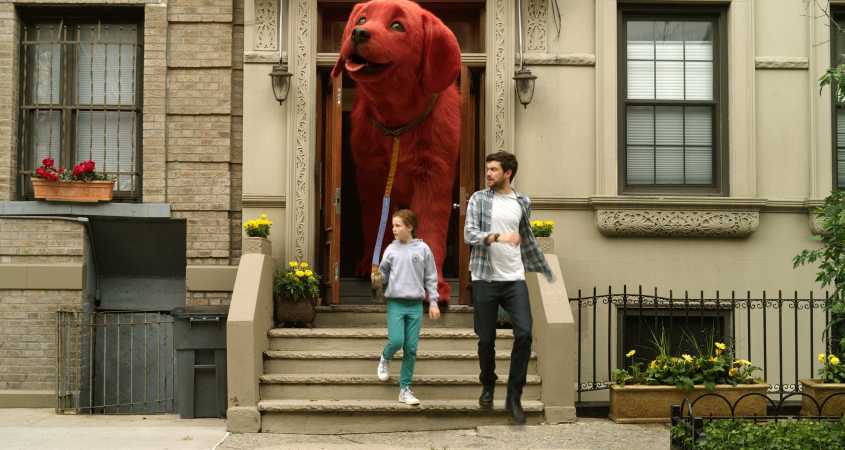 Though originating in a series of illustrated books (first published in 1963) for young children, Clifford the Big Red Dog as a live-action movie makes a rollicking feel-good entertainment for anybody.  Scholastic Entertainment, an arm of the publishing company that first published the Clifford books, has made of Scholastic’s fun-loving mascot a visually believable, utterly endearing giant of a pup.

Emily has just begun at a new school, where the most popular girl runs her down and Emily (Darby Camp) has made just one true friend, Owen (Izaac Wang).  When Emily’s mother, Maggie (Sienna Guillory), has to work out of town for two days and asks her brother, Casey (Jack Whitehall), to take care of Emily, we learn that she does so only as a last resort.  And Maggie’s opinion of her brother’s reliability is very nearly justified.  But Casey can’t resist Emily’s pleas to visit a pop-up animal-rescue organisation, in the person of a benignly mysterious gentleman, Bridwell (John Cleese, in a role that he must have loved), who promptly offers Emily a small red pup that effortlessly captures her heart, whom she names Clifford.

Because his new human’s love causes Clifford to grow over night into a three-metre pup, the usual pup activities — chasing a ball, turning around, or merely sitting down — have outsized consequences.  But he also has a heart as big as a house.  So when a GMO manufacturer decides it will claim Gifford as its own product, it must contend not only with Casey and Emily but also with Clifford himself and the surprisingly resourceful Owen, and their ability to rouse neighbourliness in their favour.

Clifford the Big Red Dog is so much fun that it’s sure to become a classic.  The entire family will get a great kick out of it, and anybody familiar with pups will get an extra kick from the verisimilitude of Clifford’s every mannerism.