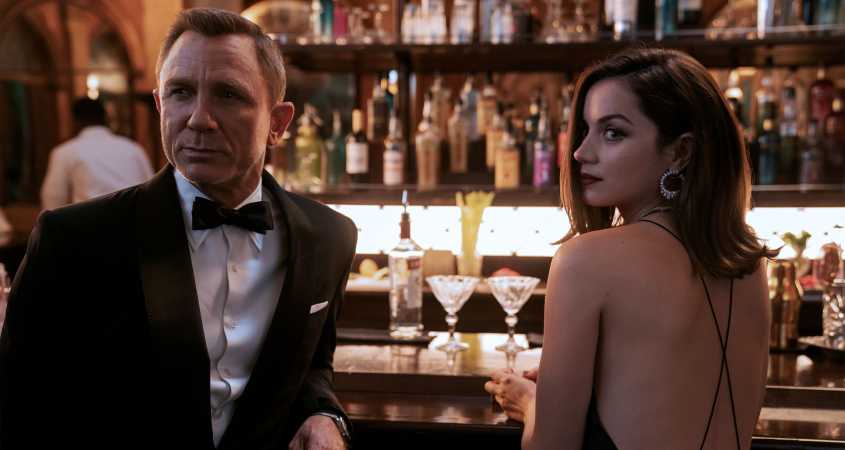 Daniel Craig’s final round as the ultimate spy James Bond sees a somewhat mellowed Bond, now retired from MI6, attacked by a gang viciously outnumbering him and his partner, Madeleine (Léa Seydoux).  Though both pull through the attack, the aftermath separates them until five years later, when Bond’s old friend Felix Leiter (Jeffrey Wright) recruits him to help locate and retrieve a fiendish bioweapon — which he can do only with Madeleine’s help.

This is, of course, merely the setup to an intricate plot full of the double agents, unbelievable gadgetry courtesy of Q (Ben Whishaw), and other surprises that make a film 007-worthy.  It’s a help in maintaining visual continuity in the Bond tradition that along with Craig as Bond return Ralph Fiennes as M, Naomie Harris as Moneypenny, and Rory Kinnear as Tanner — as well as the generally invisible SPECTRE.  But it is in the prologue to this setup, decades earlier, that we meet both Madeleine and a significant adversary (Rami Malek) who will emerge as Bond’s ultimate enemy, and that we encounter clues to the motivation underlying a nefarious scheme that rivals even SPECTRE for the evil of its ambitions.

The technology that MI6 and its opponents employ maintains the franchise’s imaginative lead, though it is based solidly in technologies available today.  From the latest special wristwatch to the special vehicles — better than ever — that 007 drives and pilots, and from stealth nanotech to stealth transportation, the technological whizzbangery and its imaginative uses make for great cinematic entertainment, and the Bond glamour is helped along by a couple of Bond girls, each demonstrating her own righteous existence as a deadly weapon.  Ah, but it’s grand to see Bond back at full charge!

On a final note, the end of the credits will give you furiously to think.