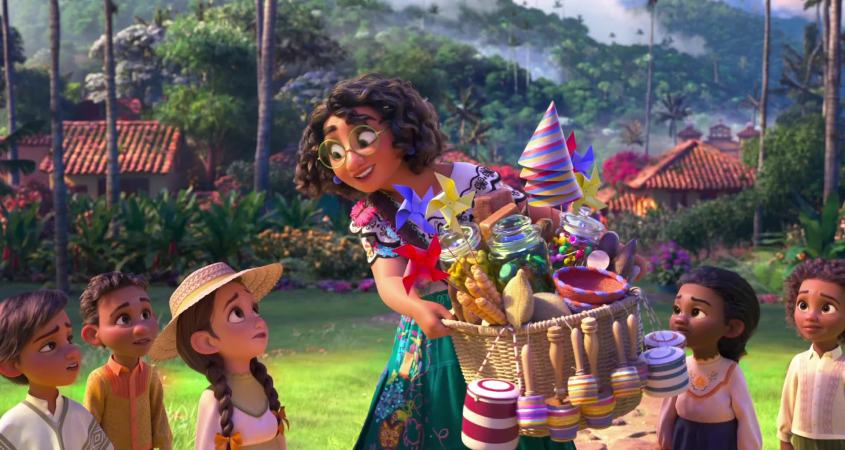 Decades ago, as the Madrigal family and their neighbours fled their home village, Alma received the gift of a special candle.  That candle brought into existence a magically autonomous home for the family in the safety of an inaccessible valley.

In the decades since, grandmother Alma has seen first her triplets and then their own children each receive from their casita, their dear house, the gift of a unique talent; all except Mirabel, whose own coming-of-age ceremony several years earlier flopped when their casita apparently refused her a gift.  And her Uncle Bruno left even earlier under some kind of cloud, apparently in connection with Mirabel’s future.

Mirabel’s whole family uses its talents to support the entire village, and harmony and cooperation make life good.  There is friction, though, between Mirabel and her “perfect” sister Isabela.  Mirabel constantly works hard to make up for having no special “gift”, and Isabela merely needs to make everything perfectly beautiful.

Mirabel has yet to come into her own; but the house itself has need of a gift she doesn’t yet know she has.  Her Uncle Bruno may be able to help her realise that gift; but the family won’t talk about Bruno.

Encanto’s storyline is at times a little arbitrary or unclear in connecting causes and effects.  But it hardly matters, as its real charm lies elsewhere: in its gorgeous colour, architecture, and wildlife; in the attitudes it demonstrates; in the antics of the house; in the characters’ dancing; and in a good deal of rapid, rich Latin American music.  Disney animations’ music is consistently catchy and beautifully produced, but the music of Encanto urges you to dance.  And the sheer number of live musicians involved in producing it suggests that little expense was spared to imbue it with such dynamic appeal.

All in all, Encanto’s generous enchantments will steal anybody’s heart.