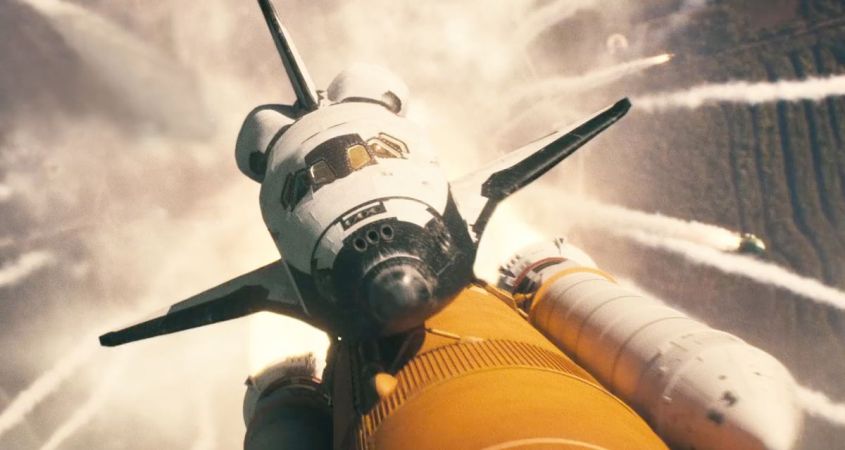 When PhD candidate Kate Dibiasky (Jennifer Lawrence) discovers a sizeable comet and her supervising professor, Dr Randall Mindy (Leonardo DiCaprio), performs prodigious calculations to find that it is on course to strike the Earth, they know that in the less than seven months remaining, they must alert everybody who may be able to intervene, from the head of NASA (Hettienne Park) right up to the U.S. President (Meryl Streep) and the mass media, all of whom treat the situation as an opportunity to entertain, grandstand, or mock rather than to avert global catastrophe.  Cate Blanchett and Tyler Perry play to perfection a pair of television hosts who, in interviewing Kate and Randall, epitomise the problem, taking every opportunity to make light of the danger for the sake of viewer ratings.

Even when the evidence of the looming holocaust becomes freely available to anybody with a telescope, the majority remain wilfully, woefully ignorant; and against Kate and Randall’s “Look up” campaign the U.S. President and her son and chief of staff, Jason (Jonah Hill), even instigate a counter campaign: “Don’t look up” for the discomfiting evidence, because it doesn’t exist.

With the help of fellow scientist Dr “Teddy” Oglethorpe (Rob Morgan) and a potential electoral disaster for the incumbent President, Kate and Randall finally get their chance to contribute ideas toward a solution.  But will solving the problem suit the already obscenely rich, or would they rather make squillions by “managing” the looming apocalypse?

Unsurprisingly, as it was made in 2021, Don’t Look Up’s satire bites down hard on the present moment in global politics as governments ignore devastating realities in favour of using populist sentiment to entrench their wealth and power.  It also has many very funny moments throughout.  Its comic genius may lie in showing us our least rational selves, trotting this way and that after social media, and in mocking the absurdist official science denialism we’ve come to know so well.  (For the film’s final joke, stay through the credits.)  Of course, a rich vein of tragicomic gold is still emerging from the continuing global conflicts between common sense and corporate greed for the writing team of columnist David Sirota and the film’s director, Adam McKay, to exploit in further satires.