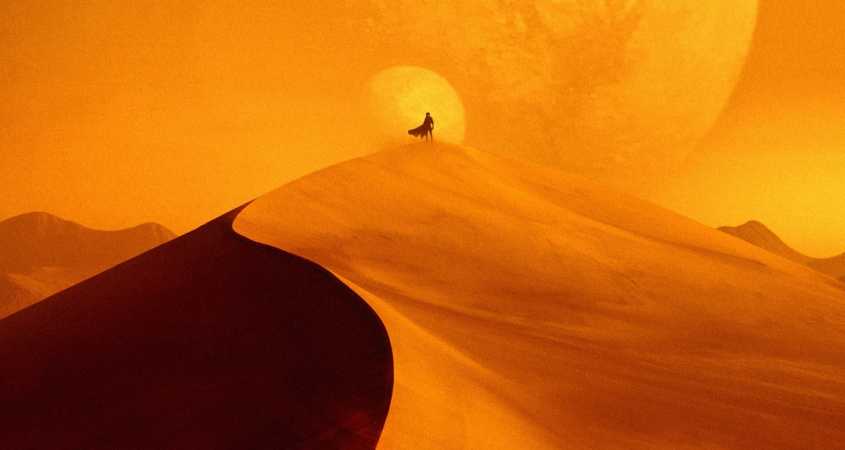 More than a hundred centuries hence, the planet Arrakis (informally known as Dune) is unique in all the known universe in producing the spice called melange, a drug essential to navigation between galaxies, making the planet extremely valuable.  Galactic Emperor Shaddam, of House Corrino, holds the power to determine who will control Arrakis and mine the spice.

But Emperor Shaddam is far from benign, so when he appoints the House Atreides, headed by Duke Leto (Oscar Isaac), to take over the spice industry in Arrakis, it could well be less a gift than a trap, especially as the Atreideses’ enemy, House Harkonnen, headed by Baron Vladimir Hakonnen (Stellan Skarsgård), has enjoyed a monopoly over spice production for six decades and has a tight relationship with the emperor.

Set against a backdrop of interstellar rivalry, political machinations, deceit, death, and destruction is a story focusing on Paul Atreides (Timothé Chamolet), son of Duke Leto and his concubine, the Lady Jessica (Rebecca Ferguson), herself part of an order of mystics, the Bene Gesserit.  Can Paul, the Duke’s young and inexperienced heir, become a leader and warrior equal to his father, or does his destiny lie elsewhere?

Based on Frank Herbert’s novel of the same name, this first episode of Dune could well be the first of many, but Dune is in fact planned as a dualogy.  Dune: Part One’s finale brings the viewer to the brink of the unknown, clearly setting up an epic tale.  Approach it as the opening instalment of a big story, and you won’t be disappointed.