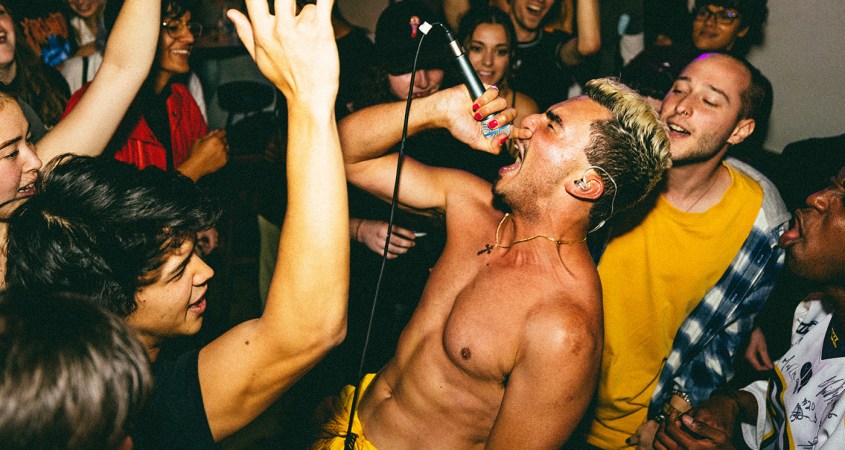 For Canberra-raised rapper Kirklandd, the concept of success isn’t straightforward. Arguably, it may seem easier to interrogate success when you’ve just been awarded an arts grant, and your childhood hero T-Pain plucks your video from a list of hundreds, gives a glowing review (“This shit is dope.”), and tweets as much to his 1.3 million followers right before you announce your upcoming tour.

But Kirklandd is just excited those opportunities mean he can make more music. Exploring the complexity of ego, self-belief, and self-doubt in his latest release, SUCCESS $TAINS, he gets closer to defining his own version of achievement.

“Across the two songs, I explore my relationship with success and my conflicted push and pull with it through an entity I’ve created called the Stains,” he explains.

While the concept of failure is anathema to the songwriter—he almost flinches at the mention of it—a sense of balance permeates his ambition, his creative approach, and the two tracks released last week.

Hubris and humility, pop melodies and trap bangers, conviction and curiosity. This is an artist hungry for authenticity, wherever it comes from.

“The Stains are a visual embodiment of how success can wrap around me and control me. At times, they might give me power and make me feel confident and successful and I get an ego glow from that energy.

“But then other times they make me feel really conflicted because my idea of success is constantly changing. So, then, I can never hit that target, which can lead to me getting down on myself.”

That duality flows through SUCCESS $TAINS in the tracks man of my word (with Lil Spacely) and idwbf (I don’t want to be famous), produced by Cam Buff.

The first song begins with a dark rumination on drowning, building tension until the beat drops and the confidence erupts. Kirklandd’s ensuing verbal gymnastics are made to sound easy, matched by the effortless flow of Lil Spacely’s feature, bringing the Western Sydney sound to Canberra for the first time. Accompanied by a high-concept animated music video by visual artist Adam Dal Pozzo, the anthemic single demands your attention.

“The chorus is borderline cocky,” Kirklandd states. “I don’t usually like making music like that, but I had been writing a song a day for a month at this point, so I was feeling authentically confident and wanted to embody that energy.”

Following that raw confidence, the second single idwbf starts off light and breezy, only for melancholy and anxiety to bleed through the lyrics. Uncertainty is present even in the shifting grammar of the refrain ‘I’ll need another life’.

“In it, I’m confused about what I’m trying to achieve,” Kirklandd reveals. “Maybe it’s that people will love me when I become successful, so I try to reach for that. But as I get closer, I realise all my idols are struggling with their vices and dealing with pain.”

In conversation, Kirklandd’s energy is infectious, which probably has something to do with the intensity of his ideas as a lightspeed lyricist, chewing through topics of conversation and sources of inspiration like a more-ish bowl of M&Ms.

Obsessed with quality, and open to artistic influence from any quarter, he pivots comfortably from spiritual exploration to videogames to Little Miss Sunshine to his migrant ancestry. While often referred to as a rapper, his discography similarly shapeshifts in genre, but it’s always, above all else, personal.

On his upcoming tour, audiences will be introduced to the emerging punk direction of his sound, integrated with visual effects and the stage presence of his live band and Lil Spacely.

“Punk has a nostalgic value that can’t be beaten,” he said, reminiscing on Tony Hawk’s Pro Skater game soundtrack.

“At least half the set is unreleased songs that I’m working on for next year. It’s really this evolution in my style and in becoming one with these Stains, becoming comfortable with what my idea of success is.

“I’m so excited about this tour. I want to draw out the energy that’s been building up in me and in everyone else. I want people to let out every bit of pent up frustration or anything they went through in lockdown. And I want us to be all together in the same space and have the best fucking time.”

A performer containing multitudes, you can be sure his evolution into a punk-driven sound will be informed by it all. Keep listening, Canberra, because Kirklandd (Kirk, to the fans) has got plenty more coming.

Get tix for the upcoming tour (and a taste of Kirklandd’s mixtape slated for a 2022 release) on 10 December in Sydney, or 18 December at our own UC Hub, Canberra with Lil Spacely and ARCHIE. SUCCESS $TAINS is available on streaming services.