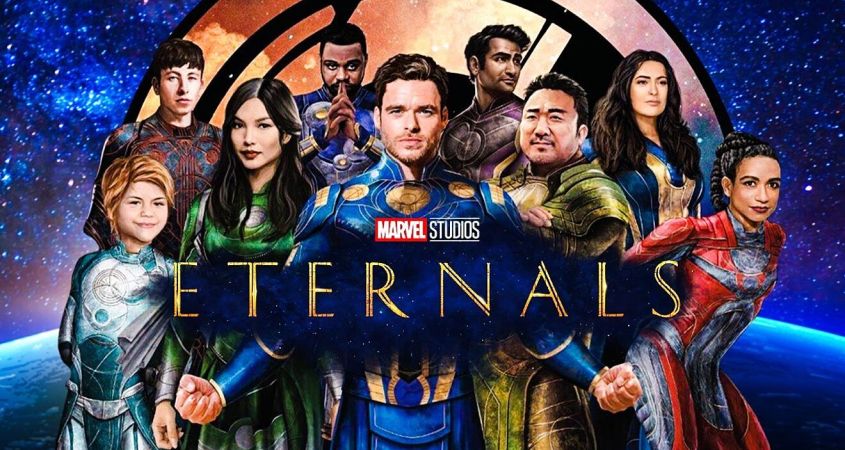 An opening crawl works for Star Wars, but it’s a red flag for Eternals. It’s the first film in the Marvel Cinematic Universe (MCU), now 26 films strong, to explain so much up top.

There’s a lot to take in because it includes singularities, celestials, deviants, eternals, and planets. All of which is tied up in the creation of the entire universe.

Yes, Eternals is biblical in scope because it makes an existential flex within a superhero story. But it gets too caught up in lore to allow its huge roster of characters to grow beyond their god-like status.

The titular Eternals, ten immortal beings with their own unique abilities, arrive on Earth in 5,000 B.C.

The mission? To exterminate predator beasts called Deviants and protect the human race.

The Eternals’ boss is Celestial Arishem. She is one of the beings responsible for the creation and expansion of the universe. Its number-one rule is to never interfere with human history; which explains why the Eternals have been missing from the MCU.

The team stay on Earth and blend into history like Forrest Gump but eventually go their seperate ways. But when Deviants begin to re-appear shortly after the events of Avengers: Endgame, the Eternals reunite and discover their true purpose.

Eternals is the reverse of a majority of the films in the MCU because these characters arrive empowered. There’s no origin story, no first night out, no time to test their superpowers. The usual Marvel formula of relatively normal people coming to terms with newfound power is absent. Eternals is about god-like beings coming to terms with their flaws and ultimately their humanity. That has always been a strength of Marvel’s rival DC Comics.

Eternals is… a lot

It’s a lot for screenwriter and director – Chloe Zhao (Nomadland), and co-writers Patrick Burleigh (Peter Rabbit 2), Ryan Firpo and Kaz Firpo – to stretch across ten characters who all wrestle with how to best guide humankind without breaking the rules. There’s enough conflict amongst Eternals to drive the story. But this is sidelined by backstory and Deviant smackdowns as an excuse to show off their powers.

Eternals was created by comic book legend Jack Kirby but the amount of excessive lore in the film make it feel more like pseudo-religious science fiction novel cooked up by L. Ron Hubbard, the founder of Scientology. Zhao’s naturalistic, magic hour visuals, captured by cinematographer Ben Davis (Dumbo, Captain Marvel), give the film a look, but are at odds with the effects used to bring the lumpy, fibrous Deviants to life.

Eternals: it’s hard to be a god. It’s even more of a challenge to get caught up in the lives of these mopey beings and keep pace with a backstory billions of years in the making.