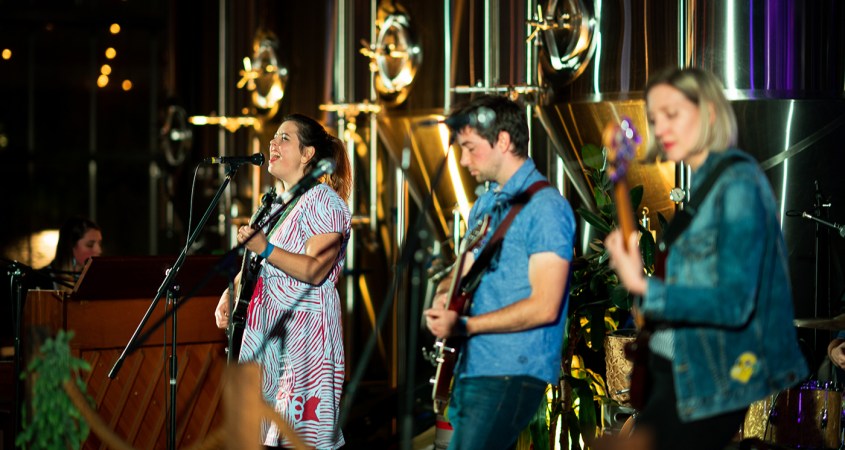 The new record follows a series of singles, including Off the Edge, Friend of Mine and Shed My Skin; all included here.

The track that opens the set is an availing representation of the general temperament of the album. Yes, the folk-pop is all here, but it’s enhanced for the most part by a considered modern approach.

Fire Exit ensnares with its introductory piano and vocal, and keeps us there with a deliciously understated synth arp in the chorus. You can add to this a cross current of blips and beats in the rhythm department, intensifying the emotional radiance of the repeated refrain, ‘never look back’.

The previous singles, Friend of Mine and Off the Edge, sound positively jaunty amid the hybrid lo-fi folk meditations. As such, they serve a valuable purpose of bridging and fusing diverse styles.

Adrift is not without its, let’s call them, playful moments. One need only listen to Rita to understand what I mean. You can appreciate the comprehensive nature of Bec Taylor’s writing skills. If the line, ‘This is gonna sound crazy but I think we’re cousins’, doesn’t register a chortle, you’re not listening.

Although technology’s fingerprints are all over modern recording and production techniques and contemporary pop records generally, it still feels quite bold to harness such methods and wed them to what is predominantly a folk record. This is the case with a few of the tracks on Adrift, most distinctly on Boat Without An Ocean. It’s here that piano and voice are later joined by a vocoder, splendidly echoing the lyric sentiment and imagery.

Adrift is undoubtedly an aggregation and culmination of Bec Taylor’s experience writing, recording, and touring. And it’s one that brings into sustained relief the strength of her artistry.

You can listen to Adrift right now on Spotify.