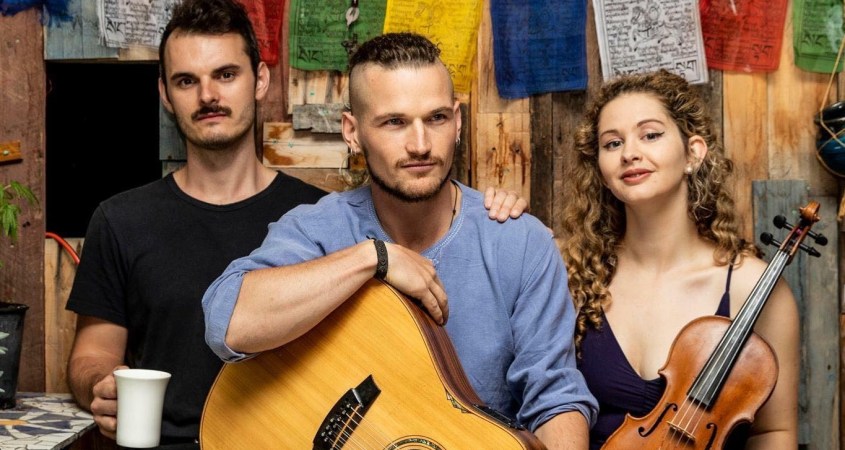 Guyy & the Fox The Mountain review by Vince Leigh

The trio is renowned for their high energy performances. Their shows have attracted followers via the Australian folk festival scene, playing to thousands at The Woodford Folk Festival, The National Folk Festival, and multiple international tours.

The Mountain arrives five years after the band’s debut self-titled EP and is undoubtedly hotly anticipated by their admirers. Utilising a strident rhythmic groove to underpin a recurring guitar/ganjo/mandolin riff, The Mountain sets its tone. Naturally, we’re talking a folk-infused rock temperament. It harnesses melody and the intermittent shift from human voice to instrument voice to create, strangely enough, a broad-brush soundscape.

Guyy & the Fox and the art of folk seduction

We know roots-based slash world music when we hear it. There’s no play for the jugular of your attention. Instead, it seduces with a constant bewitching murmur.

The Mountain does this very well indeed.

The song leads us from the semi-sombre plucks of the guitar to the soothing cadences of the voice. More precisely, via sustained notes, enhanced by harmony and caressing your eardrums oh so openheartedly.

This seduction is not only a result of these parts—the vocalised, the non-vocalised, the pauses and chord changes themselves—but via the song’s structure. Just as the first half reiterates this cycle, the final half is a surprise turn away from it.

A bridge section appears, led by Amelia Gibson’s vocal, that ventures down a slightly different path, adding another colour tone to the canvas and reinvigorating that musical spell we’ve been put under. When the opening riff returns to end the song, it is negligibly altered, as though hearing it in a dream.

A dream where things can be eloquently wrought and sublime, yet mercurial too. One that allows the self to float through its evocations.

You can keep up on Guyy & the Fox via their website, or listen to the track here.