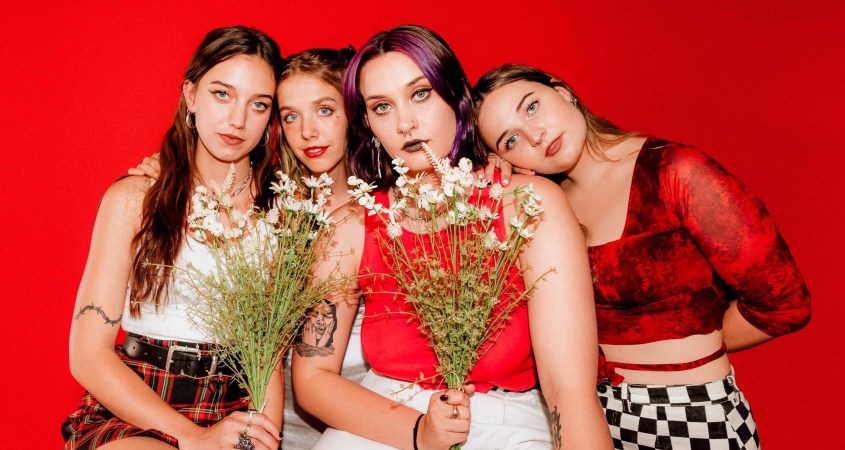 Things are getting serious for Canberra’s grunge-pop maestros Teen Jesus and the Jean Teasers. Fifth single in, and the group are on target to hypnotise and hijack the indie rock scene.

AHHHH! is a sonically smoother punk-pop excursion than previous outings but an equally expressive and wondrous one. This is the bottom line here, folks: I believe what these girls are saying. The ebb and tide of friendships, relationships, the break-ups, the breakdowns, the leaving, the letting go, the talking down.

AHHHH!’s chorus is just that: a sustained desultory cry that doubles as a hook and highlight. An apt conclusion befitting the double-tracked guitar thrusts supporting it.

Actually, the guitars might not necessarily be double tracked, but they sure do issue a reinvigorating punch.

The tune is snippy and compact—a two minute and twenty-four-second congé—segueing from a repeated verse, chorus cycle to a half-time bridge, and back to a chorus out that remains at this cut time rhythmic temperament. This is a drive-by post-grunge delivery of youth angst and post-pandemic tolerance.

Or is that intolerance?

Either way, Teen Jesus and the Jean Teasers is having none of it. AHHHH! sounds like an argument. The one you’ve been meaning to have but keep putting off. Yes, this is a euphonious grilling. But a one-sided scrupulously produced one, albeit with the vital raw elements intact and a healthy degree of grit and prankish charm.

There is a lot to like here: the dynamic arc, Anna Ryan’s snarling vocal, the guitar work smouldering in the background, the band’s general bristling countenance. This latest offering will undoubtedly continue to enthral live audiences. The band continues their ceaseless march to a bright future. Via the muscle of the music and the anticipated release of tension in the lyric, one is tuned to an unambiguous invitation to scream along to the sentiment.

AHHHH! is a gladiatorial reaffirmation of Teen Jesus and the Jean Teasers’ allure, replete with all the glory of a new rock and roll promise.