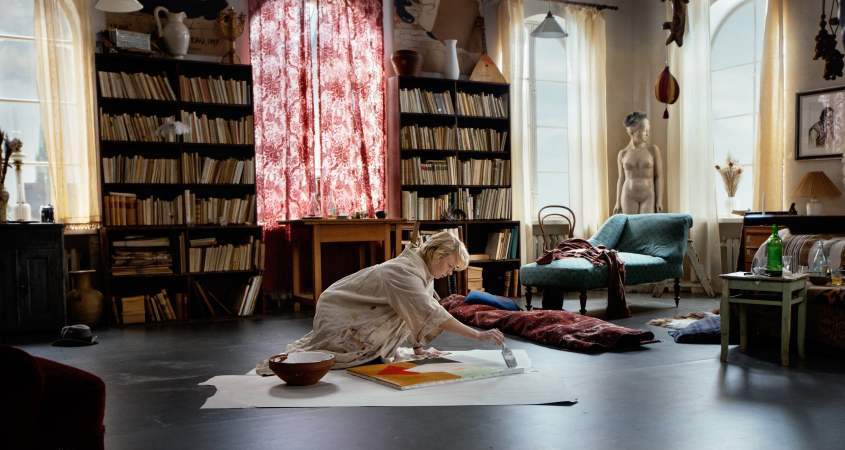 It’s 1945, toward the end of World War II.  Tove Jansson (Alma Pöysti) has grown up in a successful, artistic Bohemian Finnish family and is already an accomplished artist, but her father, Viktor “Faffan” Jansson (Robert Enckell), despite appearing Bohemian, is actually a hard-line traditionalist and disapproves of Tove’s explorative painting style.

Her father’s relentless criticism drives Tove to strike out on her own and create her own studio, where, along with pursuing what she considers her serious painting, she continues creating the Moomins, who came into being during the war and for whom she is best known and loved.

Tove socialises with intellectuals, philosophers, writers, and artists, and during one particular soiree meets Atos Wirtanen (Shanti Roney), a married man with whom she begins an affair.  Though apparently a lovely dalliance, the affair is later overshadowed when Tove meets and falls in love with Vivica Bandler (Krista Kosonen), who becomes instrumental in bringing Tove’s Moomins into the world.  But, as Shakespeare tells us, the course of true love never did run smooth, and so it proves with Tove during those years of her life.

Tove’s exploration of Tove Jansson’s early professional life mostly depicts her internal life lived large in the external world.  In the film, we see an indomitable, though loving and warm, woman incapable of being other than her passionate self, even if her reward is, at times, penury.  Through Alma Pöysti’s captivating acting, Tove appears as an intriguing, original individual finding a unique path in the world.  Krista Kosonen’s élite Vivica Bandler is coolly sophisticated but, as lovers go, impenetrable, and Shanti Roney renders Atos Wirtanen as a loyal, loving supporter.  And contributing richly to the free ebullience that the film’s characters demonstrate in their lifestyles and attitudes is a world of outstanding set design — the rich, Bohemian home of Tove, the darkly brooding studio of her father, the splendour of Vivica’s mansion, the intoxicating theatres and art galleries of the late 1940s and early 1950s Helsinki and Paris.

Ultimately Tove is an intimate look at the world of a complex woman who, though she considered herself a failed artist, has left the world a rich legacy.  Written by Eeva Putro and directed by Zaida Bergroth, Tove is a cinematic triumph.