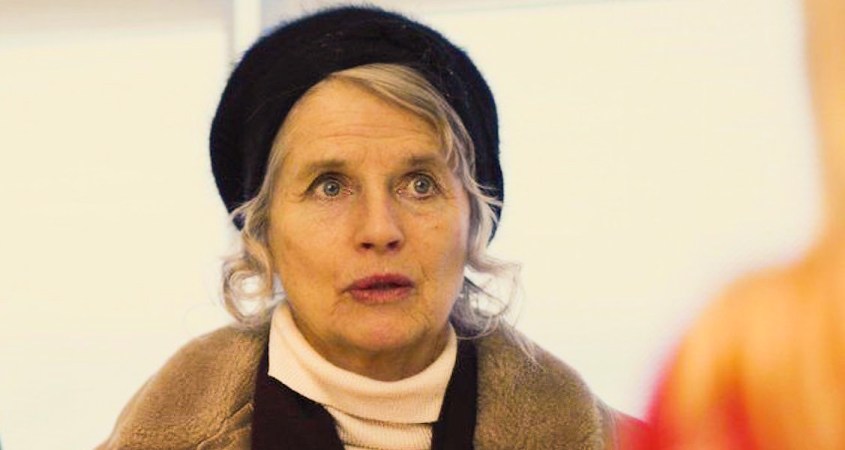 Hófí (Edda Björgvinsdóttir) is disappointed in her retirement home.  It imposes mandatory events for which residents must pay, and makes her share a room with Pétur (Þórhallur Sigurðsson), a man she doesn’t know; and she faces belittlement and neglect by its day manager (played by Þorsteinn Guðmundsson) — who is in cahoots with the owner’s up-to-no-good son, Boggi (Steinþór Hróar Steinþórsson), in thieving from the residents as well as the pharmacy.  Hófí feels treated, there, as a farm animal.

Understanding her feelings, Pétur supports Hófí’s decision to use her retirement investment to buy herself a one-room apartment.  Upon arrival at her bank, though, Hófí learns that the account that her banker had advised her to invest her significant retirement funds into has left her with almost nothing.

Furious at the bank’s cavalier appropriation of her money, Hófí embarks on a daring plan: to recover it by holding up the bank.  Pétur is good-hearted enough to pitch in, and even Hófí’s granddaughter (played by Gríma Kristjánsdóttir) becomes an unwitting accomplice.  In everything from getaway vehicle to disguises, they meticulously brush over the heist’s practical details, but the plan only goes awry because the bank was already expecting another visitor in the same disguise.

Grandma Hófí offers plenty of laughs, and few of them depend on stereotyping the elderly; they arise generally from the cleverness that Hófí’s and Pétur’s life experiences have bequeathed them.  With naturalistic interactions between our erstwhile bankrobbers and interesting characters in the investigating police officers (played by Gísli Örn Garðarsson and Víkingur Kristjánsson) and the bank guard (Pétur Jóhann Sigfússon), and a script that offers glimpses into the complex characters of Hófí and Pétur, the film is as engaging as it is funny.  Filmed without evident artifice, and arriving at a satisfyingly surprising denouement, Grandma Hófí teaches us not to underestimate our elders’ abilities or wits.