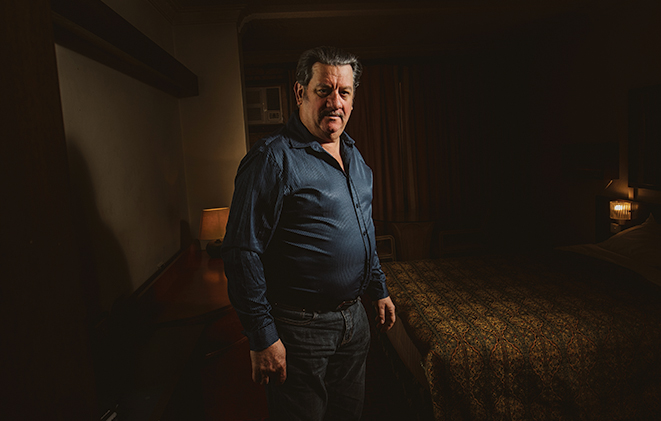 This month we spoke to Caroline Stacey, Artistic Director of The Street Theatre, about the upcoming original production, Twenty Minutes With The Devil. This thrilling, black comedy is inspired by the real-life capture of the notorious Mexican drug lord, El Chapo, and taps into the basic fears and anxieties we all possess when faced with immeasurable uncertainty and ever-present danger.

Twenty Minutes With The Devil is a speculatory examination of the unknown aspects of the most recent El Chapo arrest, where by chance, two highway patrol officers apprehend, and are subsequently ordered to hunker down in a hotel room and watch over, the most dangerous man in the world. As forces on both sides scramble to gain control of the situation, the police officers have to make choices that will save their lives or seal their fate, whilst all along not knowing who is coming for them. The inhabitants of that room suffer through the excruciating emergency of their situation where any outcome is possible, and life and death hangs in the balance for them all.

Talking to Director, Caroline Stacey, she sets the scene for us: “If you like Fargo, Narcos and those type of series, Twenty Minutes With The Devil will be right up your alley. It draws on that type of popular culture and examines some really important issues.

“The basic premise of the work is, it’s set in the locked room of the modern world, and how do we get out? How do we make the right choice before time runs out? When crisis comes, what would you do? No help, no witnesses. What do you do?” Caroline continues. “The writers came to me about three and a half years ago and pitched the idea. It was immediately interesting in terms of the characters and all of them being under pressure and not being able to leave the room. With El Chapo handcuffed to a bed in a locked room with no way out, I thought it was a great idea. So, we’ve worked steadily, workshopping, and it’s been developed from that glimmer of an idea.”

The writers, real-life law professors Desmond Manderson and Louis Gomez Ramiro, being of Mexican and Australian backgrounds, combine their talents to bring a cross-cultural mix that informs this work of true crime-inspired fiction. Their unique insight into the mysterious events of that day, along with their thorough understanding of all things law and order, makes up the perfect preparation for delving into the mind of a crime syndicate kingpin.

“The two writers were thinking about the problem of justice in the modern world, and they thought that this real-life capture of El Chapo provided an amazing canvas. Somebody that has escaped from the FBI and would have gotten away but was pulled over in the middle of the night, and they were just told to sit tight”, Caroline tells us. “Their question was – what did they talk about, these two lowly cops with the most wanted man in the world? What did he offer them? What did he do to threaten them? How did he charm them, and in a place that is so corrupt, why did these two nobodies stay put?”

Breathing life into these characters is the incredibly gifted actors, PJ Williams, Joanna Richards and Raoul Craemer. Williams, who has a long history of performance in Canberra theatre, will be unleashing a deluge of menace and darkness as the crime lord El Ticho. He was last seen at The Street Theatre in Diary of a Madman, for which he received the critic’s award for best performance. He has also acted in a swag of other Street Theatre productions such as A Doll’s House Part 2, The Faithful Servant, The Chain Bridge, Breathing Corpses, and The Give and Take.

Richards and Craemer star as Officers Angela and Romulo, the unlikely duo who apprehend El Ticho, and use every tool in the shed to keep control of the situation in their tenuous grasp. As partners, they embody the well-known ‘odd couple’ dynamic, and as Caroline puts it: “All those TV series that have cop duos, it draws upon that idiom. From Starsky & Hutch to CHiPS, to every single TV program you can name where there are two cops working together. One of them is, of course, a complete shambles, and the other is all business. So, it’s playing around with a lot of those tropes that we all know”.

Twenty Minutes With The Devil will be performed at The Street Theatre from Friday, 20 August, through to Sunday, 29 August and will include a Meet the Makers Q&A session after the Sunday 29th 4pm show with the cast and the creative team. For fans of crime fiction, this production will have you captivated from beginning to end and keep you guessing with every twist and turn.

And in case you’re still not convinced, the final word from Caroline is: “It’s very funny, gritty, and dark. There are big emotions, and it is incredibly suspenseful. You do not know what is going to happen next, and none of us want to be locked in a room with a drug lord.”