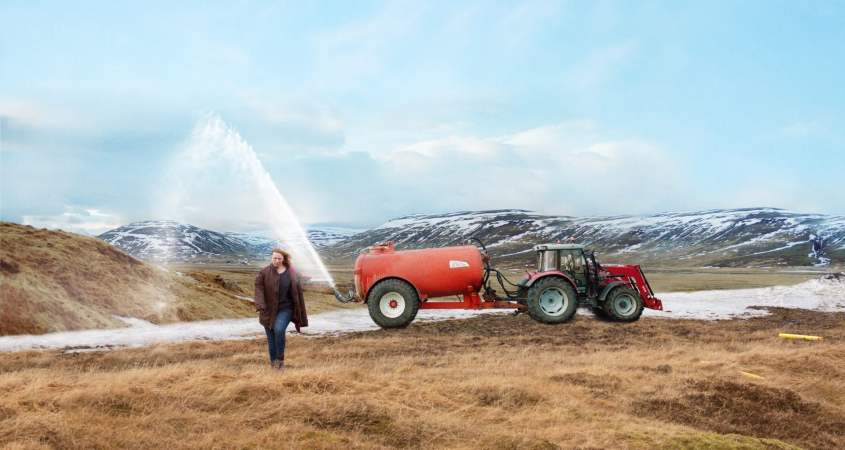 It’s cold.  It’s winter.  It’s Iceland.  Inga (Arndís Hrönn Egilsdóttir) and her husband Reynir (Hinrik Ólafsson) work hard every day without let on their dairy farm.  But no amount of work lets them escape their debt to the Co-op — which, purporting to exist for the benefit of its members, in fact benefits a very few corrupt officials at its members’ expense.

When tragedy strikes, Inga doesn’t know what to do.  She finds that what she believed about her life with her husband isn’t the whole truth.  She finds herself, in fact, in real trouble — financially and morally.

Rather than just carry on, Inga determines to change the status quo, facing down the Co-op’s threats and exposing the truth of the Co-op’s corruption.  But in this she finds herself alone, surrounded by those cowed by the Co-op’s leader, Eyjólfur (Sigurður Sigurjónsson), whose retaliation for stepping out of line they have witnessed.

Arndís Hrönn Egilsdóttir as Inga is utterly convincing.  Though life on a dairy farm in a bleak, isolated landscape is tough, Inga is as strong and capable as her husband, as unfazed by pulling a calf from its mother’s womb as she is by shovelling faeces and keeping up with Facebook.  But when heartbreak, grief, and disbelief turn to anger and righteous indignation, Inga transforms from hard-working, loyal conformist into indefatigable, fearless, justice-seeking non-conformist.  In this, Egilsdóttir’s performance as Inga is subtle, understated, and riveting.

There is nothing pretty about this film.  Life in rural Iceland isn’t for the faint-hearted.  The daily care of the cattle, the endless milking and mucking out of the cowshed, the crippling costs of everything (even manure for fertilising the fields), and the control by the Co-op are unremitting.  And it’s a life of isolation within a scattered little community.

The County is filmed almost entirely in winter, the cinematography of the vast, bleak landscape mirroring the majority of the story beautifully.  And yet, as day follows night, so too does spring follow winter, even in Iceland.  Inga may be made to pay for her dissent, but perhaps some prices are worth paying.