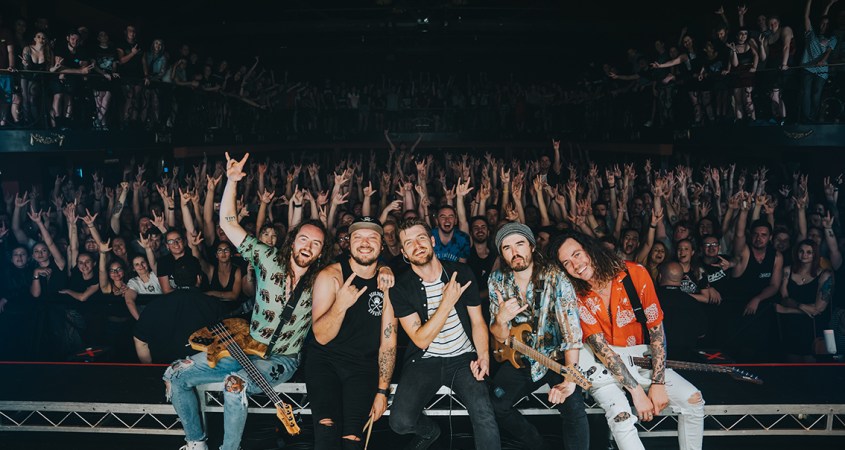 Local rock legends, Hands Like Houses, are set to unleash their stadium-sized rock show at the UC Refectory on Friday, 30 July as part of the Semester 2 O-Week celebrations. We caught up with singer Trenton and bassist Joel to see what they’ve been up to recently and to talk about the highlights of their wild, decade-long career.

Hands Like Houses (HLH) formed in 2008 from a bunch of different bands on the Canberra music scene. The five members quickly bonded over their love of artists such as Nothing But Thieves, Linkin Park, and Karnivool.

With their sights set high, they quickly found themselves partaking in huge international touring festivals, such as the Vans Warped Tour, sharing line-ups with the likes of Foo Fighters, Deftones, Alice Cooper and the Red Hot Chilli Peppers.

Add to this over 150,000 album sales globally, two top-10 ARIA albums and over 200 million streams, HLH are nothing short of a huge Australian rock band making an enormous impact both here and overseas.

They have even dominated in the sporting arenas, having scored the official theme songs for the WWE Super Showdown, as well as both AFL & NRL Grand Finals back in 2020.

But it didn’t all happen overnight for HLH, and as Joel assures us, it took a lot of hard work and having that Aussie battler attitude that pushed these five friends to achieve these huge milestones. In saying that though, they certainly had a lot of fun along the way.

“We started off touring America, playing to maybe 20 or 30 people each night, and we were absolutely loving it. Living off less than $5 a day and sleeping in the back of our van in Walmart carparks,” Joel reveals.

“We were pretty much living off peanut butter wraps and half cooked microwave pasta. We didn’t have a song that blew us up or get any free rides. We just worked our arses off and invested all our time and money into backing ourselves and what we were doing. We took nothing for granted, and our core fanbase was built through this kind of mentality.”

Interestingly, whilst HLH quietly achieved massive results overseas, it took some time before the Australian music industry really sat up and started taking notice. Having shifted 40,000 albums mainly in America, and consistently selling out 400-500 seat venues in America and the UK, they would be lucky to sell 40 tickets to a show in Australia in those early days.

That all changed with the release of their third album, Dissonants (2016), which debuted at No. 7 on the ARIA Albums charts, and gave the band both a huge boost and their first ever sold out shows in the home country.

Their latest release, 2020’s self-titled EP, has continued the evolution of their sound, with notable pop elements and catchy vocal hooks being utilised at every turn.

When asked about the recording process, singer Trenton tells us:

“We made the EP on the Central Coast in NSW over 12 days in late 2019, pre- COVID… It was a difficult process, engaging with our own strengths and weaknesses and having to trust our musical instincts to craft the best possible songs in the time we had.

“Our producer, Colin Brittain, flew out from the US to put it all together, and he was absolutely key to focusing our process, and shaping a bunch of different vibes and directions into a cohesive collection of songs.”

Unfortunately, the rest of 2020 and the overall impacts of COVID have been devastating on all aspects of the entertainment industry. For HLH, as with many others, the loss of the ability to tour means a loss of income, and a huge loss in momentum after ten years of hard work. That’s why the upcoming HLH show at the UC Refectory is going to be a truly special occasion and a chance for everyone to let their hair down and rock out all of the pent-up frustrations from the last 12 months.

No one is keener to get the show started than singer Trenton, as he lets us know:

“Hometown shows are always a rip. It used to be mostly friends and a handful of people, but in the last few years the crowds have grown and grown. I think that same sense of home-town pride comes on extra strong when it’s made up of genuine fans from the city where you grew up. It’s also a chance to put on a home-grown mixed bill of artists that we know and love as people as well as performers.”