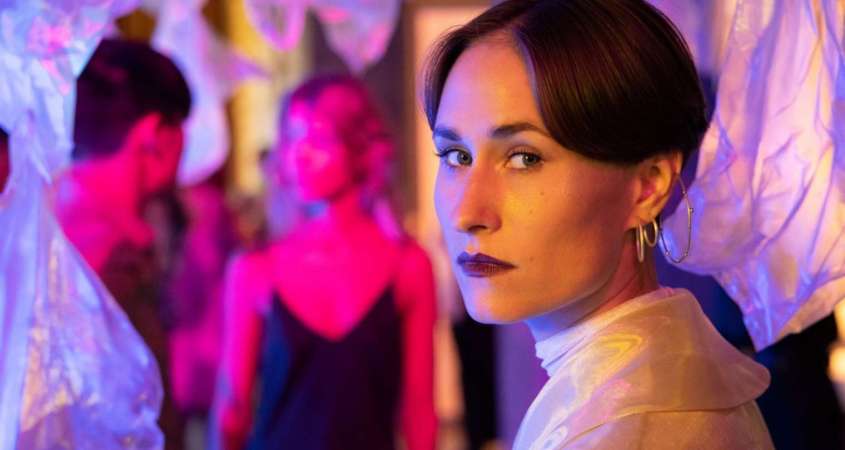 Laura (Rosalinde Mynster) is a successful author whose recent book details her unhappy childhood in rural Sweden.  Just as the book is taking off and Laura is engaged in marketing interviews, she is invited to her family home for the wedding of her brother, Jannik (Adam Ild Rohweder).

Reluctantly Laura takes the train from Copenhagen, where she has been rubbing shoulders with the arty intelligentsia, to return to the rough rural countryside where she grew up, in time to help with the pre-wedding arrangements.  It is only once she is there that she discovers that the woman Jannik is marrying is Catrine (Anne Sofie Wanstrup), whose unaddressed bullying of Laura throughout their childhood was the major contributor to Laura’s deep misery and to her leaving home.

Things go from bad to worse as Laura is systematically ostracised in favour of Catrine.  Her former friends have convenient memory lapses; no one has bothered to read Laura’s book; Catrine keeps her nasty side hidden from all but Laura; and the family comes across the interview Laura has done for a TV program in which she is explicit about who was responsible for her unhappy youth.  As if this isn’t enough, Laura’s self-centred, super-hip boyfriend, Benjamin (Thomas Hwan), arrives for the wedding in time to find fault with everyone, including Laura, and to be put out by having his time wasted in an ignorant backwater.

Persona Non Grata raises a number of questions.  Should childhood bullying be relegated to the past and ignored in spite of its ongoing harm to its victim?  Is it ever okay to pretend the past didn’t happen because of the effect that acknowledging it will have on the present?  And can a person move on without recognition, understanding, and reconciliation?

In a complex of layers and through a number of perspectives Persona Non Grata takes an uncomfortable, if honest, look at the effects of systematic cruelty, blame, ostracism, and harmful in-groups.

With excellent performances throughout, it’s easy to take sides, but as the story unfolds it’s also easy to see that, whilst bullying should never be tolerated, there might just be something to be said for the notion that childhood bullying doesn’t come from nowhere.  And the outlook on bullying’s effects that Persona Non Grata offers isn’t entirely bleak.  Revealing the transformative power of acknowledging others’ humanity, it offers also the possibility of acceptance and even healing within a family that ultimately only has itself.