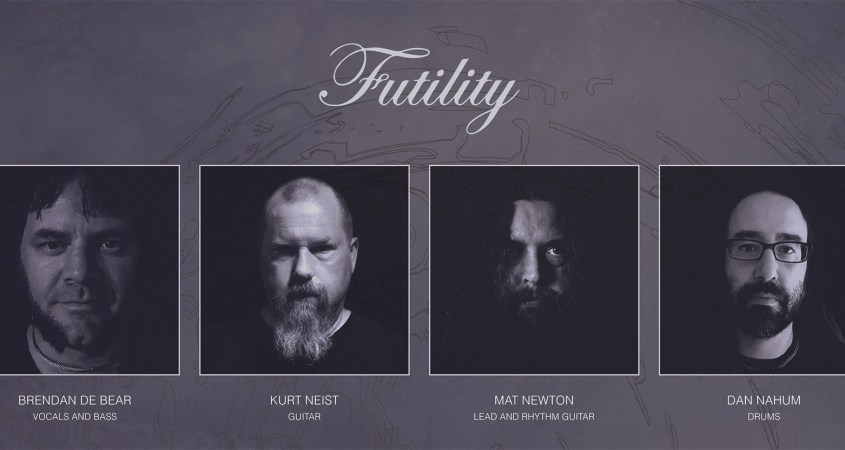 There’s something mischievously ironic about calling your album Anhedonic, the adjectival form of anhedonia—a psychological condition characterised by an inability to experience pleasure in usually pleasurable acts. But perhaps it’s fitting when it’s from a doom metal band called Futility.

The opening volley, A Visceral Melancholia, immediately transports us to Futility land; hefty, sustained notes providing a truly immovable foundation for accents and a series of guitar lines that sound more pageant-like and celebratory than one would expect. Of course, by the two-minute mark, the guttural presence of the death metal monster arrives, bringing into line the band’s ear-demolishing capabilities.

As this opener progressed, I gradually realised the similarities between Futility’s brand of extended musical forays and, hear me out, classical music.

Despite the apparent differences, there is an alignment that’s perhaps more about an approach rather than purely technical characteristics: grand dynamics, the counterpointing, the juxtaposition of searing moments—such as the anticipated guttural vocal style—with quite reflective nuances, as the guitar lines here are sometimes apt to invoke.

The following track, A Man of Great Appetites, presents a torrent of disproportionate angst, with some rhythmic diversions that go on to establish, if I may appropriate more formal terminology, certain suitably colliding movements. As heard in the other tracks, the landscape here might intone a sense of desolation, but there are a few moments amid the structured bleakness that provide many salvaging breathers.

On Soliloquy, my classical comparisons are emboldened by the band’s use of canonical material; yes, Shakespearean is an oft used term, but Futility has seized the possibilities here by harnessing the Bard of Avon’s work outright: slings and arrows indeed!

The normally pleasurable act of listening to music comes in all forms. For those who like theirs substantially heavy, distortion-led, and as dense as post-apocalyptic fall-out, then Canberra’s Futility has just the record for you.