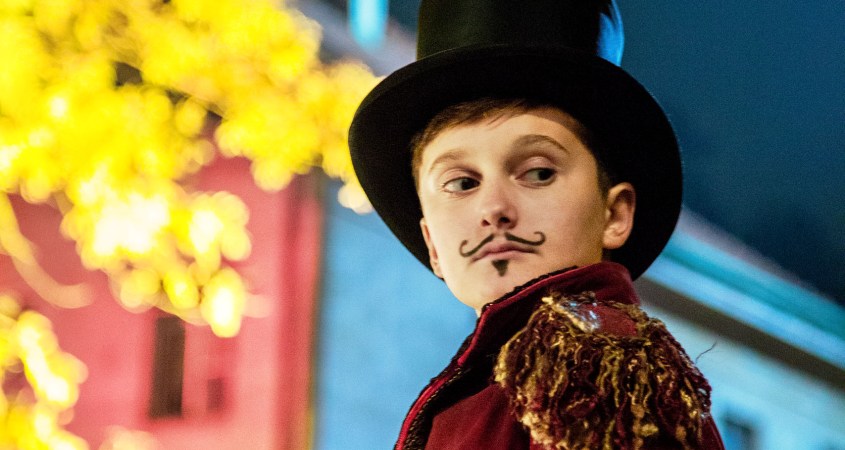 Paul Silberstein (Valentin Hagg), 12 years old in 1958 Austria, comes of a very unusual family.  His father, Roman (Karl Markovics), is deranged, and he and Paul’s mother, Emma (Sabine Timoteo), loathe each other to death; Paul’s elder brother, Johannes (Nikolaas von Schrader), is socially rigid and spends his time on his stamp collection.  Besides them, Paul has a sentimental but down-to-earth aunt and, eventually, three delightfully eccentric uncles (André Wilms, Werner Friedl, and Udo Samel).

At the insistence of his intimidating father, Paul attends a Jesuit school whose head and deputy head impose rigorous punishments in the name of spiritual love.  What keeps Paul going is chiefly a richly humorous life of the imagination; but his mother, whom he adores, his aunt (Marianne Nentwich); and the family chauffeur (Andreas Simm) offer quiet support, and his uncles all eventually contribute their remarkably individual brands of wisdom.

It’s only once Paul receives some timely advice from his uncles that Paul truly begins to direct his own life as he has always felt he one day would.  But in the meantime, he manages to subvert the most stringent demands upon him and to find the love of his life, Leonore (Nora Hochleitner).

Through a storyline beautiful in its stark simplicity and compelling in its meaning, Rupert Henning’s extraordinary feature-film debut, adapted from André Heller’s 2008 semi-autobiographical novella of the same title, charms and mesmerises us with a deception; for what at first appears to be a mere fiction turns out to present an ineluctable truth: that freedom is yours and mine for the price merely of committing ourselves to defend it.  At that point in world history, so soon after absolutist governments had used any and all excuses to institute universal surveillance, universal home detention, and even the horrors of widespread involuntary medical experimentation, freedom was not a given but a step to be taken.  Taking that step becomes Paul’s challenge, and How I Taught Myself to Be a Child demonstrates that, with courage and imagination, even a gentle child may learn to stand up to those who would have him emulate their own cooperation in the senseless robbery of their souls.