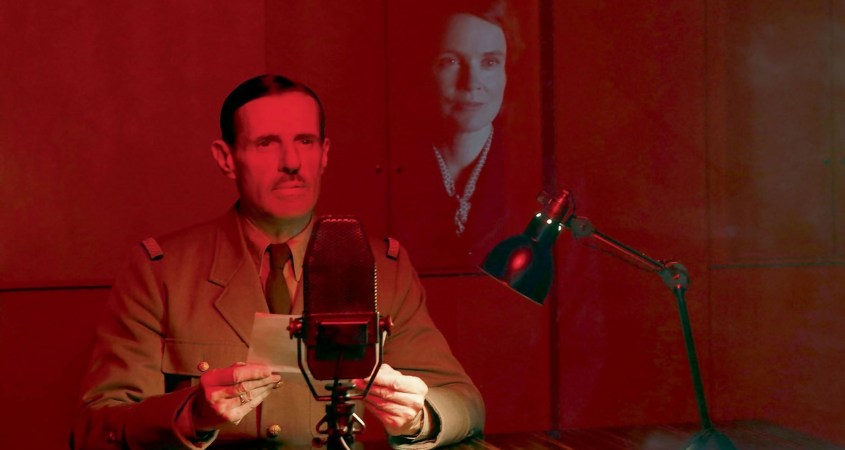 World War II, June 1940, Paris.  Germany has crossed into France and battered the French military. In a French cabinet meeting, the commander-in-chief of the French armed forces, Marshall Philippe Pétain (Philippe Laudenbach), insists that France, lacking some important machinery of war, must negotiate an armistice that would see it side with Hitler.  An uncompliant Charles De Gaulle (Lambert Wilson) protests that France must instead fight the Germans where it can.

De Gaulle travels to England to seek Britain’s military support from Sir Winston Churchill (Tim Hudson). But meanwhile France descends into universal privations, sudden displacement, and unprovoked fatalities.  The political has become personal for De Gaulle as well as for those back at home.  His wife, still in France, must make her own decisions in the interests of the family’s survival, particularly of its youngest member, Anne (Clémence Hittin), who, with Down Syndrome, is a natural target for Nazis.

Largely a dramatisation it may be, but De Gaulle attempts in its broad brushstrokes a sympathetic depiction of the man, emphasising his courage and tenacity in rebuilding the French fighting spirit from a position of exile, as self-declared leader of the free French.  Ambitious and knowing what must be done, the De Gaulle character holds, along with his wife, Yvonne (Isabelle Carré), vigorously to the essential principles at the basis of French nationhood.

The film’s sole disappointment to me lies in its depiction of Churchill, with a contrived stubborn gruffness bearing little relationship to the real Churchill’s toughness and intelligence.  This perceived flaw aside, through superb acting all around, the film succeeds as insightful entertainment by drawing us into Charles De Gaulle’s political and personal turmoil.  De Gaulle conveys remarkably a sense of the degree to which history can hinge on strength of character.