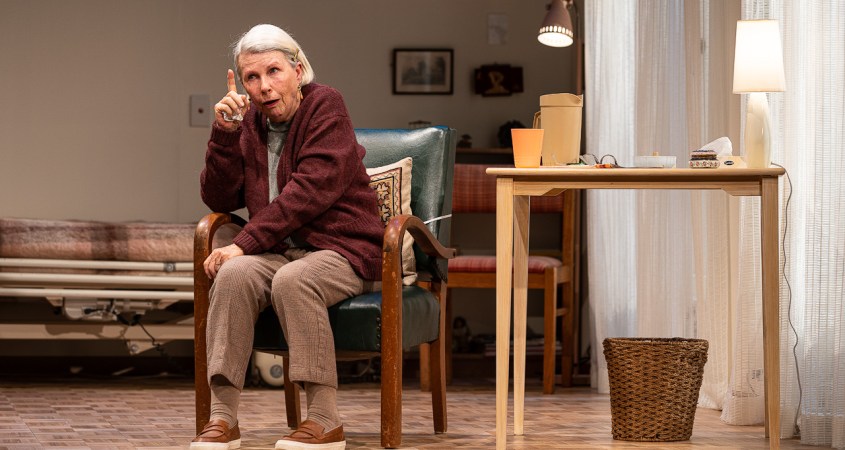 Christopher Hampton’s one-hander A German Life sets its sights on personal responsibility and ever so gently wipes away the illusions that shield us from it.

Hampton created the play largely from the 235 pages transcribed from 30 hours of interviews with Brunhilde Pomsel, a German woman who worked as a shorthand stenographer and typist in Joseph Goebbels’s Ministry of Propaganda from 1942 to 1945.

Robyn Nevin plays Brunhilde Pomsel, and her extraordinary rendition compels close attention.  Every gesture and hesitation, every swallow and syllable, every glancing look and quiet moment, speaks the truth of Pomsel’s thoughts and feelings.  So compellingly believable is Nevin’s Pomsel that when she appeared at times to have forgotten what she was going to say or to be searching for a word, you could sense the audience desire to help her by calling out the lost word.

Nevin is joined on stage, albeit in the shadows at the side, by the world-renowned cellist Catherine Finnis, whose intermittent playing adds emotional depth, pathos, and even meaning to the production — especially when original footage from Hitler’s 3rd Reich appears on the walls of Pomsel’s room in the aged-care facility in which the play is set.

To my mind, the major questions the play leaves for audience consideration include not only the complicity, willing or unwilling, of any individual in the Nazi genocide machine, or the extent of the individual’s knowledge of it, but also and especially to what extent we as individuals would — or will, or already do — close ourselves off from the humanity of others in order, collaboratively and cooperatively, to conform in condemning them.  As Robyn Nevin pointed out to the press on the day before the show’s Canberra season began, we in the civilised West are already on that slippery slope to outcasting all members of one group or another.

The partnership of Hampton; Nevin; Finnis; director Neil Armfield, and producer John Frost has brought to explosive life the reflective Pomsel; life for the German people under Nazi rule as she tells it; and a sense of the undeniable reality of 1930s and ’40s Germany.

In focusing on a particular person, place, and time in world history, A German Life raises questions that demand soul-searching by all of us, everywhere and always.  With Nevin’s incredibly riveting performance as Brunhilde Pomsel, the production deserves a long run.