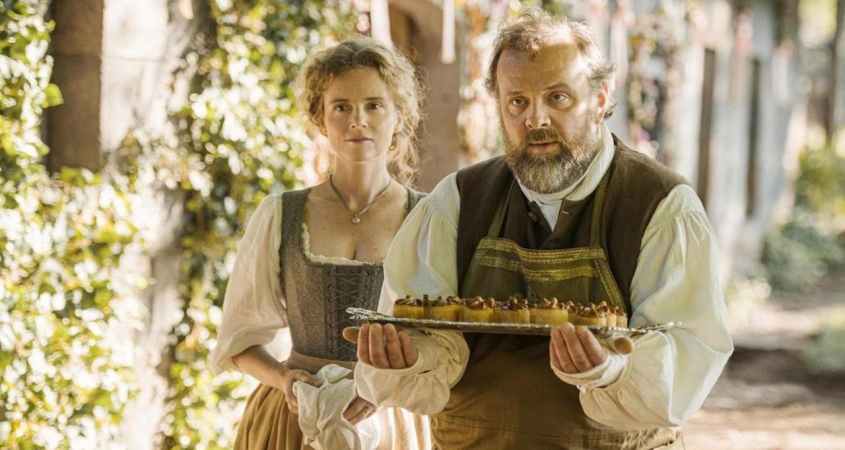 In 1789 France, revolution is brewing. But aristocrats confident of their inborn right to rule continue to indulge themselves in fantasies of inherent superiority and of their privileged lives’ unassailability.  One such is the Duke of Chamfort (Benjamin Lavernhe), who dismisses his talented cook, Pierre Manceron (Grégory Gadebois), when he refuses to apologise for presenting a dish whose ingredients displease one of the Duke’s guests. Manceron leaves his culinary life behind for a life as keeper of a small wayfarers’ inn with his son, Benjamin (Lorenzo Lefèbvre).

Into this backwater comes the mysterious Louise (Isabelle Carré), determined to apprentice herself to Manceron. Louise suggests, and Benjamin agrees, that Manceron could entice the Duke to ask him back by offering delicious meals to passing travellers. Setting up such a service becomes practicable when she offers Manceron her life savings in exchange for apprenticeship.

But the Duke’s selfishness, Manceron’s temper, and Louise’s secrets combine to complicate matters, and the on-screen chemistry between Gadebois and Carré threatens to burst into a conflagration.

Delicious is as good as its title’s promise: leaving aside the exquisite cinematography of haute cuisine, the movie is filled with dangers overt and covert, tensions sexual and political, swift turns of events, and humour. Its great pacing ensures that the events that frustrate Manceron don’t also frustrate us, and the priceless facial and vocal expressions of Guillaume de Tonquédec, as Chamfort’s head of staff, Hyacinthe, and versatile acting by Lavernhe, as the despicable duke, contribute to that liveliness. Between keeping secrets, creating serious mishaps, and cooking up marvellous foods and vengeance plots, the film leaves never a dull moment.