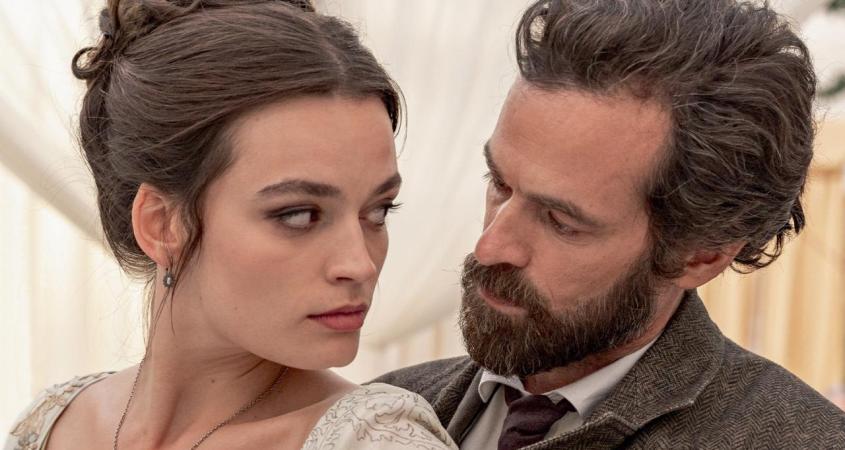 Eiffel opens just before the acceptance of Gustave Eiffel’s entry into the competition to build France’s magnificent display piece for the proposed 1889 Exposition Universelle, a world’s fair to celebrate the centennial of the French Revolution.  After winning the competition, Eiffel accepts the commission to build the tower on condition that it be accessible to the common people and therefore come into being in Paris itself.

Eiffel’s design and build win broad initial acclaim due to the promotional work of Antoine Restac (Pierre Deladonchamps).  And Eiffel continues to be supported until Restac reeks revenge for the attraction he perceives between his wife, Adrienne (Emma Mackey), and Eiffel, an attraction that, unbeknownst to Restac, was seeded 20 years earlier.

Eiffel follows both a dramatic public storyline and a dramatic private one: the tower’s fate as public opposition driven by Restac grows, and Eiffel and Adrienne’s love affair.  And the storylines’ coalescence appears to doom Eiffel on both fronts.

Though the conflicts inherent in the disparities between rich capitalists and the workers beholden to them provides a strong basis for upheaval, the movie’s beautiful bold cinematography, large sets, and exquisite detail in locations and costumes contribute to the human drama that fundamentally arises both from an easy chemistry between Duris and Mackey and from Deladonchamps’s character’s tough possessiveness.  The increasing desperation of all corners of this love triangle foreshadows an unhappy ending for somebody.

A moment in history shown on a huge scale, and worth seeing and chewing over later, Eiffel engages our senses and sympathies to bring 19th-century France to surprising life.  And the tower’s increasing financial tenuousness remains a surprisingly pressing problem even though we know that battle’s outcome.