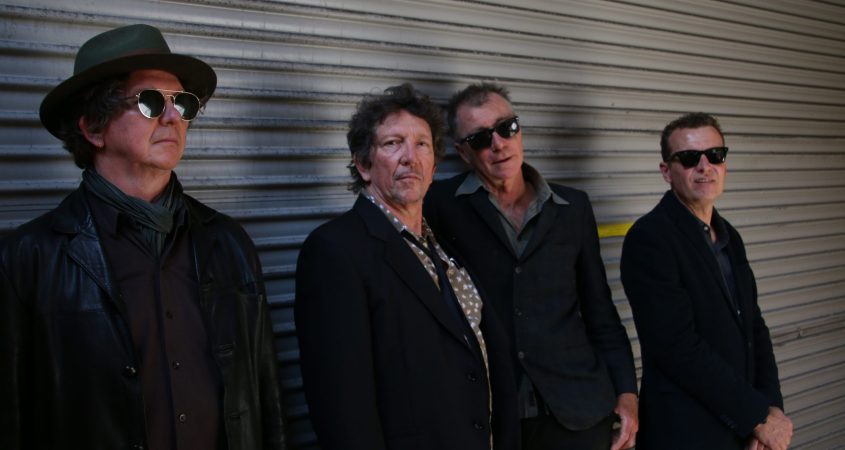 The Gadflys were channeling a bit of the Derelict look, taking the stage in a kaleidoscope of mismatched suits. However, there was nothing lacking in the array of musical talent served up to the late-night audience in the band’s second sold out show of the night. The Canberra veterans have clearly retained a strong local following. Front man Phil Moriarty noted how the punters had aged a bit and said that the ‘plus size’ T-shirts had all sold out early on.

The Gadlys’ set had a good mix of old tunes and material from Love and Despair, their first new album in almost two decades. Their musical style is hard to define, being a mix of genres. The early punkish feel has largely vanished and there are strong overtones of the ‘50s and ‘60s in their harmonies which are a consistent feature of their material.

One song even had an acknowledged tribute to The Ronettes, melding ‘Be my little darling, be my baby now’ into the lyrics.

The set opened with Moonlight Flower, which contains the lyrics for which the new LP draws its title. Song themes leapt about from suburban pastimes to the joy of the open road to the terror of the sea. There was a trilogy of ocean themed songs, which allowed Elmo to show off his guitar prowess.

Brothers Phil and Mick swapped lead vocal duties and Phil demonstrated his versatility with guitar, clarinet, trombone, penny whistle and harmonica. Such musical interjections boosted the richness of their music, which employed deceptively simple, catchy tunes. The pace picked up towards the close of the set, and people would have danced it they had been allowed to.

It’s good to have The Gadflys back.