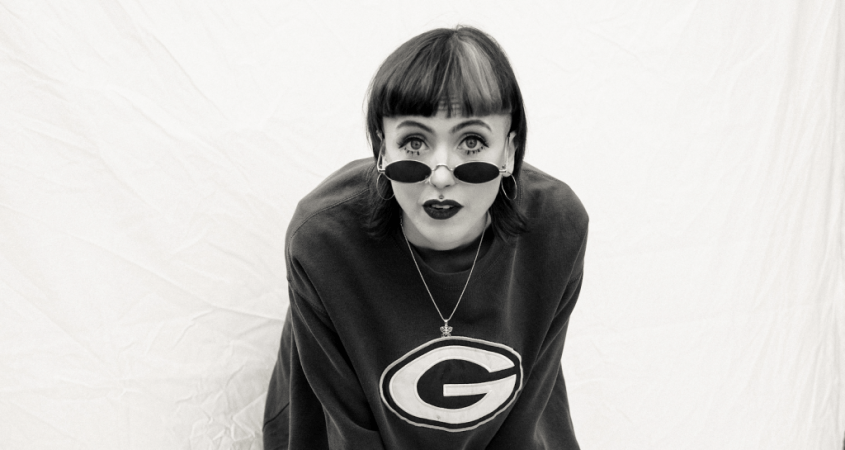 I think I’m scared to move on,
I’m a lake after droughts,
I am nothing.

This is quite an escalation.

In a sense, the rate of diminishment here might, in a microevolutionary form, reflect conversely the speed of our lives. And those careering towards the threshold of adulthood might feel this acceleration more acutely. Or maybe not. Personal hurt expelled through the lens of self-analysis. Maladaptation that’s related to society.

The above line is from Harsh, the fifth single for the Canberra-based outfit Groovy Daughter. Since the release of her acclaimed debut Tyro Dreamer in 2018, Nicole Wilde-Carr AKA Groovy Daughter has gone on to nurture an ever-expanding profile, performing in a series of shows with Slum Sociable, Thandi Phoenix, as well as strutting the Groovin the Moo boards.

During the 2020 pandemic, Groovy Daughter took part in a series of online shows, including a performance on the Isol-Aid line up alongside Courtney Barnett and Alex the Astronaut, as well as Live In Ya Lounge. And just recently, she found herself as the triple j Unearthed Featured Artist.

Now, we have Harsh, a team up with ubiquitous Canberra hip hop producer prodigy Citizen Kay, and a self-assured meditation on self-criticism—the irony here is worth noting—featuring Wilde-Carr’s contained yet simmering-with-tension vocal performance which is one part Amy Shark, one part Beth Gibbons, but more persuasively operating in her own corner.

When neutered from Wilde-Carr’s hyper-galvanic disconcertment, the music—muted guitar lines, trip-hop ’90s flavoured drum loop, various sonic textures—pleasingly adheres to deputy status. And this is most evident when the vocal shifts up an octave during the second chorus, exposing us to a skilful vocalist’s sweet high spots.

The melodic elements team up effectively, with the line, What if I, what if I, what if I let go of the pain? convincingly reiterating the swell of anxiety, said swell mirrored also in the groove’s languor, invoking a palpable sense of indecision, irresolution.

However, the track sounds as if it’s on the cusp of revelation, with its exquisite rendering of unease and emotional malaise.

Identification is perhaps the trigger point for engagement here, and Harsh will undoubtedly resonate with many.