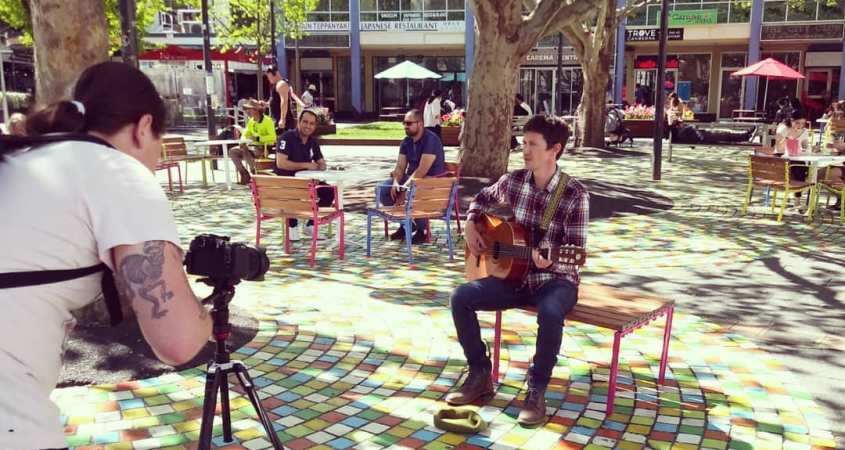 Few can lay claim to having a father who was a one-hit-wonder in Belgium with a song called Savez-Vous Danser Sans Souliers, which translates in English to Can You Dance Without Shoes. Well, Moozy, the songwriter and lead singer from the Canberra and Melbourne based outfit The Royal Belgian Conspiracy can.

Moozy trained as a jazz musician; however, he was always more attracted to indie-folk and alt-country music and these influences are evident on the outfit’s new release Hold On. And if you were wondering about the band name, the origins derive from Moozy’s Belgian roots; there was a Baron in his family (apparently the ‘Conspiracy’ reference was added for punch).

Hold On is just the kind of indie alt-folk pop song that’s guaranteed to soothe and assuage, the type of track one might hear over the closing credits of a feel-good dramedy that’s earnestly romantic without succumbing to full-tilt sentimentalism. Moozy’s vocal style is a clear reminder of an assortment of other artists: it’s a little Damien Rice and Justin Townes Earle, with the band’s sound containing the exuberance of The Lumineers and august allure of Fleet Foxes.

Hold On is a clean-limbed record, an element that helps maintain a sense of intimacy and closeness, without eschewing dynamism or changes in sonic texture. The song features a palpable evocation of hope, warmth, and positivity with a lyric whose narrative reflects that—the message is quite personal here people. Still, it’s the kind of personal that’s universal; and it sounds like it.

As Moozy says about his songs:

“Really, I just want some people to like my music enough to be drawn to listen to it on their own accord. That would give me enormous satisfaction.”

Part of the satisfaction the listener will feel emanates from the carefully considered constituents of surprise and predictability. One moment we can anticipate the chorus’ arrival, during the next we’re relishing its sweet and revelatory intonations. Hold On is also latently persuasive; long after those end repetitions dissolve, you just might notice the melodic passages circling in your head, a lilting and pleasing after effect.