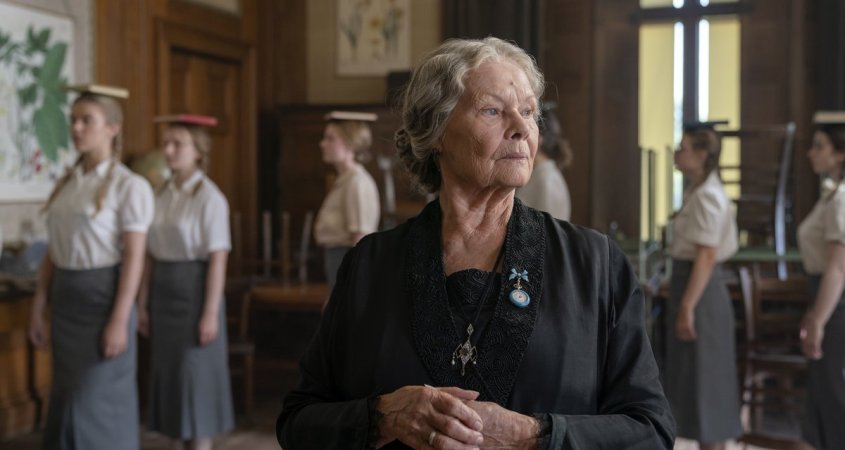 With diplomatic tensions at breaking point following Hitler’s invasion of Poland, a girls’ finishing school managed by a starry-eyed Miss Rocholl (Dame Judi Dench) and taught by an ex-pupil, Ilse (Carla Juri) has attracted the interest of British Intelligence. The school’s pupils are the daughters of high-ranking German Nazi officials, and the Brits expect the Nazis to smuggle the girls to Germany immediately before triggering war with Britain.

When an intelligence agent posing as a teacher at the school is murdered, another agent, Captain Thomas Miller (Eddie Izzard), having applied for and obtained the teaching post, uncovers vital intelligence that puts his own life in danger.

Despite strong leads by Judi Dench and Eddie Izzard (who co-wrote it with director Andy Goddard and Celyn Jones, who plays a police corporal) and an appealing character in Charlie the bus driver (Jim Broadbent), the film offers little insight into any character’s personal motivations, and it contains the odd distracting irrelevancy and minor plot hole. (Picking up the murder weapon surely isn’t the kind of mistake an experienced operative would make, even in 1939.)

Despite such faults, Six Minutes to Midnight generally holds together as an entertaining thriller; its camerawork employs angles and perspectives that serve to heighten tension; and its resolution, fittingly not tying up every loose end, satisfies the promises it makes the viewer at the outset. As a thriller that examines the position of children as pawns of empire, it’s certainly worth a look.