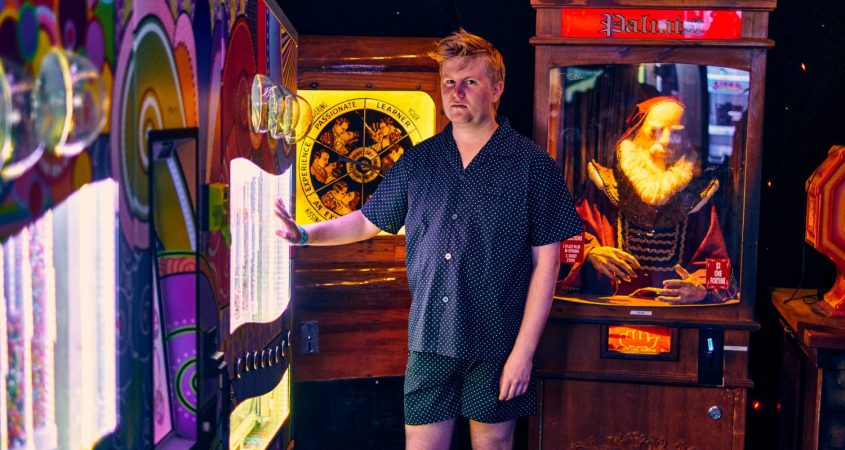 Melbourne singer-songwriter Daniel Oke, AKA Jarrow, first launched his musical career with the 2015 EP Legitimate, followed by two albums including 2018’s hilariously named Expensive Hugs. Keep A Tab (On All My Friends) has been released as a taster for his third upcoming LP, due out in May.

Known for funny lyrics heard in songs such as Kelp, Jarrow centres his songs on a keen observation of human behaviour, which he then presents with a humorous twist. Everything about him demonstrates an oddball sense of humour, from his videos to his listing “Queen” for his “Sounds like” JJJ Unearthed website entry.

Jarrow takes a deliberate lo-fi approach and his singing has a rough edge to it, with a dry, dead pan delivery. This eccentricity is an essential element in the appeal of his material.

The melodies in Keep A Tab (On All My Friends) carry a simple appeal and the song lights up with bright guitar licks. The lyrics ‘Sinking down a cocktail of self-deprecation’ inject themes of anxiety and excessive self-criticism. Plus, there is the popular obsession (maybe a bit less right now, as no one can do much of anything) as to what everyone else is doing, and fears of missing out.

There are hints that this is a song of the virus season, with lyrics ‘Been a long time since I felt your touch’ and the video consisting of separate clips of the singer and musicians. Then there is the irony of, ‘I’m so damn busy’ (when none of us are).

Jarrow’s single brightens up these dull times with its charming quirkiness, and a veiled hint that we should try not to take things too seriously.